Belle & Sebastian get my inner YA angst

Graduate school was a real trip.  I applied for a teaching assistantship in the English Department immediately after finishing undergrad because I thought it was the responsible thing to do – i.e. get an impressive job in my field as quickly as possible, while also reaching for higher degrees.

But I just as quickly started realizing I was…different from my peers.  While most of my fellow T.A.s had favorite genres and sub-genres of canon literature, I was off in my own corner with my YA and fairy tale obsessions, trying to figure out where I fit in Academia while also keeping up with an increasingly stressful workload.  It didn’t help that my depression and anxiety were constantly convincing me I was an impostor, so why bother getting those papers done on time?

I’d like to say the experience was worth it, though I didn’t end up finishing the program.  There were some good points.  One of them was the day a fellow T.A. stepped into my office, perhaps lured by the eclectic sounds of my Pandora QuickMix.  She handed me two CDs.  One was an ominous-looking red case, featuring a black-and-white image of a meditative woman lounging on her bed, next to a copy of Kafka’s The Trial.  The other was a two-disc compilation with a funny title that made a bit of oddly profound poetry out of an ordinary door sign. 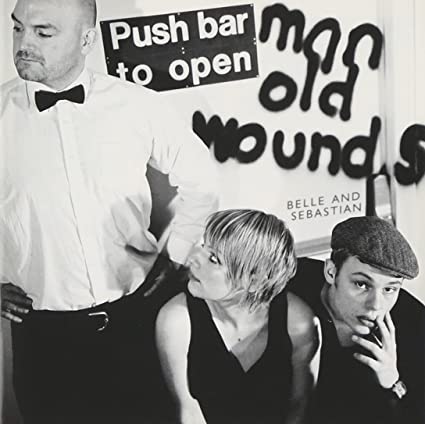 Popping If You’re Feeling Sinister into my laptop, I was immediately intrigued by the kookiness of “The Stars of Track and Field.”  There was something neo-hippie about it, with its praise of beautifully ordinary people just trying to find the bright side of life.  I got an even stronger flower-power feel from songs like “Legal Man” (on the Push Barman album) with its admonition to “get out of the city and into the sunshine,” and from “Song for Sunshine” (from The Life Pursuit) with its…well, the whole thing.

What I oddly didn’t notice right away, but what must have subconsciously hooked me, was the underlying bookishness of it all.  I love literary-musical intersections in general, and Belle and Sebastian is one of the most literary bands out there. Their name pays homage to a 1965 French children’s novel by Cecile Aubry – a classic boy-and-his-dog story that must have inspired songs like “Dog On Wheels,” sung from a child’s point of view and alluding to the snowy Alps.  The band’s name is also, according to legend, a reference to lead-singer Stuart Murdoch’s own short story of the same name. He and bass player Stuart David both had authorial aspirations in addition to their indie pop dreams.

If Belle and Sebastian aren’t dedicating entire songs to imaginary tomes, they’re sprinkling literary Easter eggs all over their discography – from the Judy Blume reference in “Le Pastie De La Bourgeoisie” to the unnamed book “that always makes you cry” in “Piazza, New York Catcher.”  From the equestrian story that inspires a lonely teen songwriter in “Judy and the Dream Of Horses” to the Biblical musings of a high-school choirgirl in “Act of the Apostle, Pt. 1.”  Their music video for “Wrapped Up In Books” is even set in a bookstore.

What truly appeals to me, though, is the persona the band develops in their songs:  the bookish misfit who hasn’t completely overcome their adolescent sensibilities.  I’ve spent the past decade coming to terms with – and even taking pride in – my fairy-tale-twisting, YA-inhaling, depression-surviving self, and Belle and Sebastian have provided the background music to my journey of self-actualization.  They’ve told me it’s ok to daydream about backpacking around San Francisco coffee houses with my unrequited love. They’ve told me that, one day, I’ll find someone as “wrapped up in books” as I am, who will cross that “rainbow bridge” with me into a gloriously geeky future.  They’ve told me that my bookwyrm card is just as valid as those of my more academic peers.

Recently, I read two biographies of the band – Stuart David’s autobiography In the All-Night Café and Paul Whitelaw’s Belle and Sebastian: Just a Modern Rock Story (an in-progress read) – and found even more to relate to, and more reasons to hope.  Stuart Murdoch also had to deal with an illness that forced him to leave college.  Stuart David spent seven years in his parents’ attic, working on his novels and songs, before a government-sponsored Work Training program put him in Stuart M’s path.  Cellist Isobel Campbell ran into Stuart M at a party and discovered she had a fatefully perfect nickname that just happened to match the co-protagonist of his short story.

And I LOVE the story of Stuart D’s relationship with Looper bandmate Karn, which developed over seven years of letter-writing and occasional meet-ups at various seashores.

Perhaps my own fateful moment is waiting, if I just stay true to my own quirky, word-wise self.  Perhaps I, too, will find my own love interest with whom to go beach hopping and bookstore canoodling.  Maybe I’ll read a book that triggers a dream that leads to a bestselling novel about sparkling zombie horses.  Or something.

What about you, Bookwyrms?  What music feeds your inner protagonist?  What bands just get you?  What songs give you hope that your own story will have plenty of Happily Ever Afters?