“You’re here to put an end to us, and a Selkie without a skin is no concern of Faerie’s.”

I’ve decided to start the new decade with a four-part series looking back at one of my favorite literary/folkloric subjects of all time:

The first three posts will be reviews — two new reads and a nostalgic favorite, all of which focus on the ultimate question:  What is a true selkie?  Is it the skin?  Or is it something else?  Where does a skinless selkie fit in Faerie?  What relationship can a skinless selkie have with the sea?

Finally, I will reflect on (mostly) Juv/YA selkie lore as a whole, or at least the sub-set of it that I’ve read in the past 23 years.  What is the balance of human and beast in a selkie?  Are they primarily humans who sometimes change into seals, or vice versa?  What do they actually need in order to transform?  What (if anything) can a non-selkie do with a stolen skin?  Where do selkies fit in among the rest of Faerie?  When do you capitalize “Selkie” and when do you leave it lower-case? 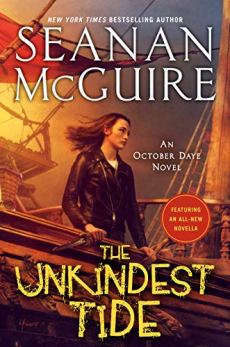 Rating:  4.88 out of 5 green eyes, clear as driftglass, waiting to look out on the world once more.

Recommended if you like:  Feeling fist-pumpy and frustrated at the same time. Those moments when a character points out exactly what you’ve been shouting at these books for years, only in more eloquent terms.  Ambiguous endings.

Like the previous Toby review, this one is going to be split into two pages:  Page 1 is Safe Waters (at least, if you’ve read all the previous Toby books), while page 2 (and, possibly, the Comments section) is SPOILER Territory.

These are mer-stories, my sea-scaled bookwyrms, and that means…the long-awaited return of the Tide Metaphor!  I haven’t used it since my first Toby review, back in 2012.  I first used it to describe my experience reading Undine, by Penni Russon, a story that alternately flowed toward me, calling and compelling me forward…

…and then ebbed away from me, losing me with unclear (or nonexistent) explanations or eyeroll-worthy characterizations or confusing plot points.

But anyhoo, back to The Unkindest Tide!

The non-spoilery story, in a seashell

The Luidaeg shows up on Toby’s doorstep one March evening and announces that It’s Time.  The Selkie race has lived long enough, using the skins of her slain seal children — the Roane — to live on the edges of Faerie.  Selkies shift between human and magic in a way that never sat comfortably with the rest of Faerie, because sealskins can be stolen and re-used by anyone (at least theoretically).  Sealskins can expose Faerie to the human world.  But they were the only way the sea witch could think of to honor her murdered children, at the time.

Now she has a better way.  Toby has the power to shift the balance of magic in a person’s blood.  And that power is strong enough now to fulfill the Luidaeg’s ultimate goal:  to end the Selkie race and bring back the Roane.

The trouble is: there are only so many sealskins to go around.  They have always been passed down from parent to child, and those with multiple children have had to make difficult choices.  What would desperate parents do to ensure that more of their children could become Roane?  What will become of the skinless Selkies left behind?

And what will this mean for the balance of Faerie?  What will it mean for Toby’s own daughter, whose new skin is the only thing keeping her alive?

Also, there’s some merrow political intrigues and Dianda gets arrested and Toby has to go on a brief side quest.

As my rating shows, The Unkindest Tide mostly flowed, decorating my shore with gifts of:

But there were a few moments when the Narrative Ocean lost me, when the story left me stranded on shore, watching some confusing plot point or incomplete explanation or illogical ret-con or sort-of(?) anti-climax(?) sail off without me.

Still, this was one of those books I liked so much I bought it in digital AND tree-book form (hardcover, even!).  It raises questions — some intriguing and some annoying — and that’s much of the fun of the Toby books.  It has all those lovely Toby one-liners (not to be confused with the groan-worthy Toby one-liners) about folk music and ghosts, and then there’s this really lovely Cassandra line that sums up the whole book and makes me feel more optimistic about Current Events and personal situations:

So! For those of you who haven’t read The Unkindest Tide and don’t want to enter SPOILER Territory, that was the gist of my review.  If you don’t mind knowing more, or if you’ve already read the book, sail on to page 2.