Why you should (allow yourself to) read “below your capabilities.”

Ten years ago, I started this blog with the intention of flaunting and celebrating my refusal to “grow up.”  I named the blog “Postcards from La-La Land” as a wink at those people who criticized me for focusing too much on mermaids and unicorns, and not enough on Serious Subjects that would prepare me for Adulthood.  For not obeying the officially assigned age ranges of the books I chose to buy or borrow.  For continuing to read “junk” books that were “unworthy” of a talented reader with So Much Potential.

Let’s talk about that.  Are certain books better than others at turning readers into savvy, articulate, compassionate, successful world citizens?  Answer:  I believe it’s just as possible to challenge yourself with books that look easy or frivolous as it is to challenge yourself with a Pulitzer winner.  I believe that an Easy Reader with short sentences and a size 20 font is just as capable of blasting open your worldview as the latest Oprah’s Book Club pick.

For example:  to a teen who grew up hearing only strict and inflexible definitions of gender and biology, Alex Gino’s middle-grade novel George could be just as world-altering as Virginia Woolf’s Orlando.  A picture book like Pancho Rabbit and the Coyote, by Duncan Tonatiuh, could inspire just as much compassion for undocumented migrants as the YA novel Crossing the Wire, by Will Hobbs. 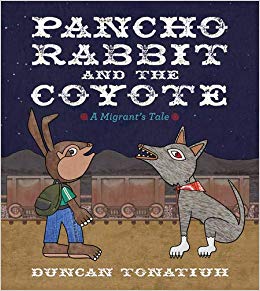 As Ricki Ginsberg of Unleashing Readers points out, focusing too much on reading levels can actually limit a reader’s understanding of themselves and their participation in the world.  The worst thing you can do, says Ginsberg, is to make a reader “internalize” a reading level.

“A child will tell me, ‘I am a G reader.’ How does this G reader feel when the G reader is surrounded by J reader peers? What does this do for reader confidence? If we must use reading levels, let’s tell kids that they are reading G books and aren’t G readers. Reading levels shouldn’t define them.”

I would flip Ginsberg’s question and ask: how might a “J reader” feel, watching a “G reader” enjoying an interesting book that the J reader’s parents and teachers have deemed off-limits because it’s too easy?

Now, when I talk about the worthiness of “easy” books, I’m not just talking about the books that tackle tough subjects.  I’m also encouraging you not to worry so much about preparing for adulthood.  I’m talking about not putting an age limit on stories — on imagination — for their own sake.

Side track:  This is relevant, I promise!  I’m giving a major side-eye to all those towns with laws “banning” teenage trick-or-treaters.  To be fair, the most extreme case has since been clarified and relaxed — the town of Chesapeake, VA now lets kids trick-or-treat until they’re 14, and says it never intended to actually jail older teens for “safely trick or treating with a younger sibling.”  And, yes, I get that the police department is mainly worried about those teens who choose to spend the night smashing pumpkins and doing drugs.

But besides the flawed logic of condemning an entire demographic for the actions of a few, the whole idea of shaming teens for engaging in a favorite childhood tradition — the idea that they can only justify their participation if they’re accompanied by a younger child — is wrong.

Any attempt to rush kids into no-nonsense adulthood is hypocritical, considering the lengths to which we adults go to reclaim our childhoods.  If you expect people to respect your right to LARP in public, it’s only fair for you to respect the fifteen-year-old who wants to dress up as Elsa and collect Reese’s pumpkins for a few hours.  Even if you’re not the type to dress up like Hello Kitty at any time of the year, you should still respect your local teens’ right to forget about being Too Cool or Too Mature for a few hours.

Sub Side Track (still relevant, I swear!):  I’m also reminded of that Lizzie McGuire episode in which the tween protagonists try to find some socially acceptable excuse to see a live taping of their favorite kids’ show, decide to just go without a child chaperone, and end up starting a nostalgic revolution in their school cafeteria.  Or something.

What I’m getting at is that you shouldn’t need an elaborate excuse (er, I’m doing a sociology paper on 90s pre-teen magazines!) or pretend you’re just doing this to please a member of the target audience (my babysitting charges love Elephant & Piggie!), before you read/watch/play something that interests you.

Parents and teachers:  if your sixth-grader still reads the Disney Fairies books, or if you catch your sixteen-year old curled up with a Wimpy Kid diary, let them be!  They’ve clearly found something worthwhile in their reading choices.  You can certainly talk up the books you’d like them to add to their TBR piles, but don’t…do not…I repeat: DO. NOT. Shame or discourage your reader if their personal choices don’t conform to the highest level they’re capable of.

You might even be surprised by some of the insights they gain — even subconsciously — from books that aren’t explicitly about serious subjects.  Seriously, chat me up in the comments about what Bruce Coville’s Unicorn Chronicles can teach us about immigration and religion and extremism and indigenous rights.  Or, notice that those skinny media tie-ins are teaching your reader to value diversity precisely by focusing on zany adventures instead of on the characters’ races or ethnicities or religious backgrounds.

In other words:  don’t worry so much about having a correct or appropriate reading experience.  Just as you can’t fully prevent kids from encountering tough subjects “before they’re ready,” you also can’t force people to “grow up” their reading tastes — especially if your definition of growing up means a strictly linear progression away from the person you were and the stories you liked before.  Read the stories that call to you, no matter which part of the library they’re calling from!