Back in 1994, editor Karen Bokram had a vision.  She wanted to create a magazine for middle-grade/pre-teen girls that focused on all their interests.  Meaning, not just boys and celebrity boys and flirting techniques that work on boys.  She wanted to give girls a magazine that explored “fashion, sports, cooking, reading, horses, the environment, and especially her friends and family.”**  And so, in the late summer of ’94, Girls’ Life was born. 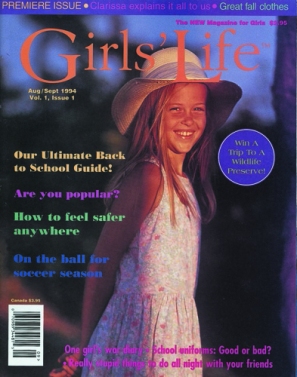 The premiere issue was filled with an eclectic mix of topics both fun and serious:

Girls could learn how to get better grades, how to save money, and how not to lose sleep over popularity.  They could learn about personal safety, road trip survival, fun books to read before school started, and what the heck Woodstock was (LOL, why not?  It was presented in a totally kid-appropriate way, of course).

Basically, a range of topics as diverse and three-dimensional as real girls.

Fast forward to May 1996, when ten-year-old Nerija received her first issue of Girls’ Life in the mail.

This was the Summer Olympics issue, which featured all the awesome tween and teen athletes training for the 2000 Games.  Even though I was very much an I’d-rather-read-during-gym-class kind of kid, I was still totally inspired by synchronized swimming duo Jenna and Jamee, purple-belt judo master Anastasia, runner Kadrina, and softball star Toni.

I also felt totally grown up reading articles about vegetarianism, money-making hobbies, and What To Do During That Time of the Month.

[ 90s Flashback: snail mail pen pals!  The June/July ’96 issue had  two pages full of tween girls who were looking for pen pals.  Don’t worry; they all listed P.O. Boxes instead of their real addresses ^_^;; ]

And of course I added the Team Sweet Valley books, Gotz playdolls, and Smackers Shooting Starfruit body shampoo to my beg-Mom-to-buy list.

Anyhoo, for the next two years, I waited with baited breath as That Time of Every Other Month came along and the mail carrier delivered a new issue of Girls’ Life.  I discovered some of my still-favorite books through their recommendations (like Dolphin Sky and Time Windows).  I fell in love with the daydream-validating, imagination-fueling Secret Paths games, which I’ve recently rediscovered through the magic of YouTube “Let’s Plays” and Classic Mac emulators.

I marveled at stories of girls in the military, girls playing hockey, girls rocking out and riding horses and saving the environment.  I learned that girls are multi-faceted and that Girl Power doesn’t just mean one thing — you could be tough and wear make-up.  You could play sports and play with dolls.  You could daydream about boys and about becoming the next POTUS.

Fast forward to January 2019, when I happened upon a few recent issues of Girls’ Life on my library’s teen magazine rack, and felt the nostalgia bug take a bite.  I smiled as I flipped past articles on mindfulness and skimmed the newest Middle Grade/YA book recs.  I paused to admire the vibrant fashion shoots (my, how the times have changed!  The 90s GL would never have taunted pre-teen girls with $70 sweaters and $129 dresses!).  And I raised two very pleasantly surprised eyebrows at the acknowledgement — even promotion — of LGBTQ girls!

The “Ask Carol” letters featured girls who were questioning their sexuality or wondering how to help friends who might be gay!  The crush/flirting tips referred to readers’ potential love interests with both male and female (and sometimes “they/them”) pronouns!  Articles featured girls like Eleanor Wheeler, who is both a queer activist and an advocate for disability rights!

Doing a quick search through my library’s digital publication archive shows me that Girls’ Life was becoming more LGBTQ-aware since at least 2006, when a reader wrote in to ask if her feelings for a female friend were “gay.”  The response was positive enough, though maybe a bit unintentionally dismissive:

A few years ago, there was talk about “the girl crush.” It’s what happens when you like a girl so much that you get a natural high around her. This doesn’t necessarily mean you’re gay. It’s possible to feel strongly about a friend. If you have feelings for other girls and still question your sexuality, talk to a counselor. But it’s likely that what you’re feeling is just intense admiration.***

It kind of reminds me of how Liza’s mother, in Annie on My Mind, tried to explain away her daughter’s “intense” feelings for her friend Annie.  I also wonder about the tone behind the suggestion to “talk to a counselor” if you really think you’re gay or bi.  As though it’s something to be concerned about, rather than accepted and celebrated as an awesome part of who you are.  (Again, how the times have changed!)

One area where Girls’ Life could still improve their portrayal of LGBTQ girls is…by actually portraying them, visually, in their relationship articles.  As far as I’ve seen, all the crush quizzes and such still only feature photos of hetero couples.  How about a picture of two girls holding hands or dancing or sharing an ice cream sundae?

Overall, though, the magazine’s attitude has evolved in a more celebratory and inclusive direction.   To paraphrase Dorothy Colleen of the BigCloset TopShelf blog, Girls’ Life presents queer girls as role models, as people anyone can relate to and look up to.

What’s that?  Why, yes, I did recently re-subscribe!  And maybe ordered a few back issues.  #notsorry #YAwriter #itsforresearch #butalso #nostalgiclikewoah