The October Report: Night and Silence

Srsly, major spoilers ahead.  Beware and all that.

So, after the last book took us a step closer to the Big Three Creators of Faerie, this latest installment is like, @#!$ it!  We’re gonna meet one of them in person!  And guess what?  She’s not one of the Big Three, actually.  She’s the FOURTH CREATOR.  Remember how we were wondering who Toby’s grandmother was?  Turns out, she’s a HUMAN!!!  You know Janet, from the story of Tam Lin?  Apparently, she had a one-night dalliance with Oberon after breaking Maeve’s Ride and screwing everything up for Faerie.

She’s been hiding out with Toby’s estranged ex-fiance for the past decade or so and acting as Gillian’s stepmother!!!1!!!1!

Srsly, that’s Graduate-level messed up.  It’s really only a matter of time before Cliff finds out about all this, and oak and ash, is he gonna be piiiiisssed.

But anyway, apparently, the false Queen of the Mists (who escaped her coma with help from her minion Duncan, who apparently escaped his own imprisonment after One Salt Sea…) found out about Janet and decided to frame her for kidnapping Gillian, while she, the false queen, gets Gillian safely hidden in the old knowe by the sea, where the final boss battle is supposed to happen.

And here we get more examples of Toby being indestructible, of course.  Sword in the stomach?  No big.  Not fun, but Toby can deal.

But then, wouldn’t you know it, Gillian gets herself elf-shot AGAIN.  The false queen does it to give Toby incentive to give back the false queen’s Siren blood (which, if you’ll recall, Toby removed in Chimes at Midnight).  Which Toby can’t do.  So Gillian’s really screwed this time, right?

Because apparently the Luidaeg decides: screw my limitations and geases and all that!  I’m gonna save Gillian by TURNING HER INTO A SELKIE. 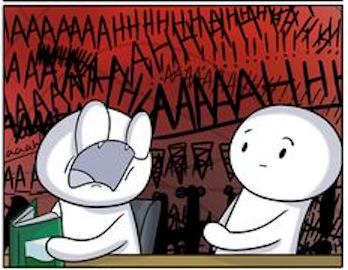 The Luidaeg gives Gillian her youngest daughter’s pelt, which Gillian now has to wear for a hundred years, until the elf-shot wears off.  Which, somehow, she’s going to have to hide from her father.  But, you know, minor details.

Which also means the Luidaeg can’t end her contract with the selkies at least for another hundred years, right?  And maybe she’ll finally forgive Liz Ryan and they’ll get back together and dance all night by the sea?  Right???

On a related note, it’s really not the smartest idea to brag to Duncan about the whole Selkie!Gillian thing, Toby.  Seeing as how the false queen’s so hard to keep imprisoned, and now you’ve given her valuable information she could use for further nefarious purposes.  Just sayin’.

But anyway, Gillian now knows the truth about Toby, and why she disappeared for fourteen years, so… ESTRANGEMENT OVER!!!

That was Night and Silence.

If you’ll excuse me, I’m gonna go stalk Seanan McGuire’s Twitter feed for updates on Book 13.  Who’s with me?

Faerie art from Brian Froud’s Faeries and World of Faerie.
“Oh, you’re at that part,” by theodd1sout.tumblr.com