Ghastly Ever After: Twisted Myths for teens and up

At our final stop on this frightful journey through Faerie Land, the bloody-footed mermaid at the door gives us three collections of terrifying tales rated Teen-and-up.  These are tales of blood-thirsty gods, angels of death, and demonic Cinderellas.  Tales of blood and bones, certainly, but also the more subtle, everyday horror of unhappy marriages and neighbors who maybe care a little too much.

This time, the order of tales is not according to Scare-o-Meter rating, but age-appropriateness.  We start with the twisted myths appropriate for mid-teens, and end with a collection of wicked fairy tales more appropriate for college-age and older readers.  Of course, as always, the decision is up to you re: which stories you feel ready to tackle.  The important thing is to have an open mind and strong critical thinking skills.

If I haven’t scared you off yet, walk this way (but mind your head)…

Scare-o-Meter:  8 out of 10 immortal livers being feasted upon by Zeus’ golden eagle.

I was much more impressed with this collection than with Twisted Fairy Tales.  The stories were more consistently dark and deadly, definitely living up to the book’s premise.  Maura McHugh didn’t even need to do much twisting herself to bring out the gruesome elements.  She simply chose the myths that were disturbing to begin with, and artist Jane Laurie enhanced them with viciously vivid paintings of blood-speckled gods; gods with bare skeleton faces; gods making ghastly, teeth-baring grimaces at the reader.

Of course, the level of horror varies from story to story.  A few, like the Greek story of Eros and Psyche, have but a hint of blood, while others, like the Egyptian “Sekhmet’s Thirst,” have rivers of red.  But, as I said, the overall tone is much more consistent with the “dark and dangerous” theme.

My favorites were “The Coming of the Tuatha De Dannan” (not to be confused with the purple-haired, teleporting Tuatha of October Daye’s Fae-verse); “Lord Ganesha” (an Indian legend of one of the most popular Hindu gods); “The Fifth Sun” (an Aztec creation myth that features Chalchiuhtlicue, one of my favorite water goddesses that I featured in my parody of the “Limonade Brault” poster); “Pele Comes to Hawai’i” (a tale of some srsly intense sibling rivalry); and “White Buffalo Woman” (a Seneca tale from Native North America, in which a powerful woman smites the man who tries to sexually harass her, and rewards the man who shows her dignity and respect).

I give this collection a 5 out of 5 golden apples from Asgard. 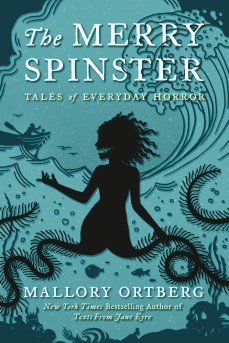 Scare-o-Meter:  6 out of 10 vicious velveteen rabbits.

Daniel Ortberg twists familiar fables and bedtime stories, turning them into macabre adult tales of deadly angels, wicked mermaids, and not-so-forgiving animal neighbors.  In Ortberg’s versions, the Little Mermaid makes a much less noble decision in the end; the Velveteen Rabbit decides to steal himself some Realness from the boy; and the sister of the six wild swans gets her quiet, smiling revenge on a brutish husband.

The only story I didn’t like was the Goose Girl retelling (“The Wedding Party”), which was literally just one character re-telling the Goose Girl story to her fiancé.  I much prefer twisted fairy tales that don’t beat you over the head with which fairy tale they’re twisting.  Luckily, most of Ortberg’s stories are more subtle about their sources.

And Ortberg’s inspiration comes from a neat variety of sources, from Grimm to Genesis, from British ballads to 20th-century American short stories, from religious texts to more secular folktales.

But the best thing about The Merry Spinster is the gender-fluid characters who defy the social roles promoted in the original texts — daughters named Paul, brothers named Sylvia, women and men who take turns being husbands and wives.  Ortberg himself was transitioning as he was writing the stories (the book was published under his old name, since he hadn’t made his transition official yet), and so he created a world that reflects his experience.  If you’d like to learn more about Ortberg, I recommend this interview in New York Magazine. 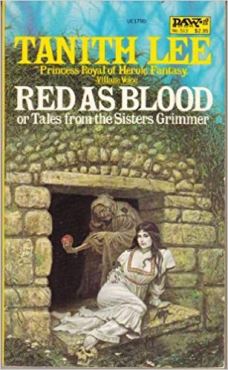 Scare-o-Meter:  7 out of 10 chimes of doom from the deadly grandfather clock.

What if Snow White were the real villain and the “wicked queen” just a sadly maligned innocent? What if awakening Sleeping Beauty would be the mistake of a lifetime — of several lifetimes? What if the famous folk tales were retold with an eye to more horrific possibilities?

These stories are complicated — more complicated even than the publisher’s summary suggests.  Tanith Lee does spin inverted stories of wicked beauties and sympathetic stepmothers.  But she also tells of truly wicked witches — the kind of witches the Puritans believed in, the kind who actually do have hellish connections.  And yet, she also tells of more sympathetic pagan magicians.

She enters into the battle between Christianity and paganism, yet doesn’t take a clear stance one way or the other.  Some stories allow the Christian stepmother to “cure” a stubbornly pagan Snow White, or the Jesus figure to lure children away from their rat-worshipping community.  But other stories feature the strong-willed grandmother invoking an ancient wolf goddess to smite her abusive husband, or the innocent Rapunzel being rescued from her hellish captor by a sympathetic leader of the Underworld.

Like with Neil Gaiman’s Sandman comics, this collection requires you to have a really open mind about religion.  You’ll have to make up your own mind about these wicked Cinderellas and heavenly Pied Pipers.  Who are the heroes and who are the villains?  Are there any heroes?

My favorite stories include “Wolfland” (which I discussed in more depth here); “When the Clock Strikes” (a sinister Cinderella tale with hints of Poe’s “The Masque of the Red Death”); and “Beauty” (a futuristic Beauty and the Beast in which the Beast is an alien rather than an earthly monster).

I give this one a 4.5 out of 5 genetically-engineered roses.

The night wanes, the faery houses turn out their welcoming lights, and it’s time to head home with our cauldrons full of treats.  I hope I’ve added to your TBR pile this month, and that you have a fabulous time at your mortal Halloween parties and on your more local trick-or-treat journeys.  Remember — costume responsibly.  No ethnicity-caricaturizing outfits, ‘k?