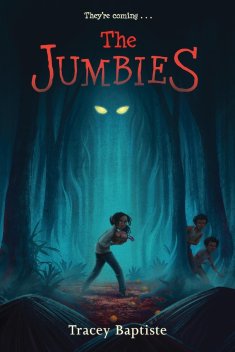 This is Tracey Baptiste’s ode to Caribbean fairy tales — a.k.a. jumbie tales.  Jumbies are pretty much the Caribbean’s answer to the Unseelie Court, scary creatures who can take human form to lure children into the forest, never to be seen again.  There’s La Diabless, a wicked woman whose long white gown hides a cow’s hoof; the soucouyant, a fearsome fireball disguised as a friendly old woman; the lagahoo, a demon dog dragging chains behind itself; and Severine, a suspicious stranger who appears on All Hallows Eve and begins charming the human community so the jumbies can take over the island.

Only Corinne La Mer and her friends can stop Severine and her army, using ancient magic to restore balance on the island.  Because, as this story teaches us, sometimes we aren’t facing an easy battle between Good and Evil.  Sometimes we have to consider the “enemy’s” perspective, to consider why they are acting the way they are, to acknowledge our own part in the problem.

I give this one a 5 out of 5 magic stone pendants wrapped around an agouti’s neck.

Neil Gaiman and Chris Riddell.  The Sleeper and the Spindle.  New York: Harper, 2013.

Scare-o-Meter:  5 out of 10 knife-sharp spindles threaded with blood.

Next to Sandman, this is my favorite Neil Gaiman story.  It’s a feminist, LGBT twist on Snow White and Sleeping Beauty, in which the young queen takes up the sword and travels to the sleeping kingdom to rescue the princess.  Her path is barred by spike-steep mountains and knife-sharp thorns and cursed sleepwalkers, but they are no match for a determined hero.  But what waits for her in the tallest tower is worse than she expected.

The illustrations by Chris Riddell are eerie, sometimes surreal scenes in black and white, with an occasional hint of gold.  They enliven the story so well, I can’t imagine the text working as well without them.  The world would be only half built — the text provides the bones (good, strong bones) but the illustrations provide the flesh. 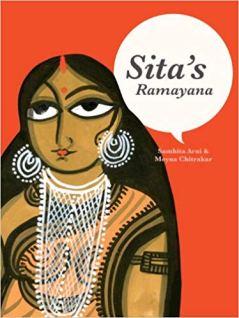 Scare-o-Meter:  6 out of 10 journeys into hell after decapitating a friendly giant

The Ramayana is an ancient Indian legend of an epic hero named Rama, who battles demons, giants, and even gods to rescue his wife, Sita, from an evil king.  The original story focuses on Rama’s courage and nobility.  But Arni and Chitrakar, like other female storytellers before them, turn to Sita’s side of the story, showing the horrors of war and the unjust treatment of women by powerful men — even by respected, beloved heroes.

The artwork is as intense as the story, the backgrounds wild and bright, the character expressions so intense that some of them practically fall off the face.  It’s a style called Patua folk-art, a kind of scroll-painting meant to go along with oral storytelling.  Although the images were reorganized into panels for the graphic novel, they refuse to be tamed, the characters and backgrounds screaming for the reader’s attention.

My only complaint is that the narration occasionally feels a bit too matter-of-fact and distant from the scenes it describes, and the beginning is a bit too in medias res, going straight to Rama’s exile from Ayodhya without explaining why he was exiled.  Still, it’s a beautiful and powerful retelling that I highly recommend.

P.S.  If that’s not Halloweenish enough for you, Samhita Arni is working on a Ramayana thriller.  Yes, please!

This one’s going to be a trip.  Reading this book was an exercise in being a yo-yo, bungie-ing back and forth between

It has very neat messages about embracing your dark side in a safe context and knowing the difference between horror writers and actual psychopaths.  And the villain is a complex human being rather than just a typical Evil Witch.  She has understandable motivations, and she actually helps the protagonist overcome his fear of his talent for writing disturbing stories.  And those stories really are awesome examples of subtle horror — very Poe-like, often leaving the actual moment of terror to the reader’s imagination.

It’s a really clever twist on the 1001 Arabian Nights, as well as “Hansel and Gretel,” and…THERE ARE ZOMBICORNS!!!  Well, super creepy unicorns, anyway.  But I’m going to think of them as zombicorns, so there!

But here’s the thing… the horrible child-kidnapping witch is portrayed as a black woman, while the hero/victim is a young white male.  That, right away, set the red flags flapping in my mind.  This could go very wrong, I thought, if the author’s not extremely careful.

But what am I saying?  Should a writer never portray the villain as a person of color unless the protagonist is also a person of color?  What matters is treating each character like an individual, right?  J. A. White does seem pretty respectful in his character portrayals.  Natacha is a complicated human being with strong motivations and some really positive traits.  Her race, like that of all the other characters, is incidental — it’s never mentioned after we first meet her.

And she’s not the only person of color in the story, nor is Alex a lone hero.  He may be the main protagonist, but he doesn’t get to the Final Battle without Yasmin’s help.  Yasmin is the Hermione to Alex’s Harry.  There may be times when she needs him to rescue her, but it goes the other way around, too.  Their handling of the Final Battle is definitely a team effort.

Buuuut…I really hate the way Natacha’s story arc ends.  Despite everything she’s done, I believe she deserves so much better than the ending J. A. White gives her.

And also, there’s this bit where she’s acting like a servant to another witch — a white witch — and as much as I want to shut out Real Life historical context when I’m escaping into a fantasy world, I just can’t quite do it.

For now, I’m giving this one a @#$cucumber+error%! out of 5 Halloween Advent calendars

Scare-o-Meter:  10 out of 10 HOLY DISMEMBERMENT FETISHES, BATMAN!!!  This author is a sadist!  Unlike the previous book, this one is not subtle about its horror elements.

The tone may be cheeky and the narrator may cut in all the time to “apologize” for all the blood and gore and rolling heads, but for the love of childhood innocence!  I debated pushing this book onto the Teens-and-older list, because I think it takes a pretty mature reader to question some of the messages this book is sending — particularly the messages about self-harm, and about the need to fight horrific violence with more horrific violence.

So, why am I recommending this book at all?  Because, if you are a mature reader and have a strong stomach, and are a fairy tale buff like me, this is a really unique mash-up of Hansel & Gretel with the lesser-known Grimm tales, plus a few tales from Gidwitz’s own imagination.

And the story could be helpful for kids who have experienced abuse or other kinds of trauma, because it teaches that sometimes really bad things happen to good people and it’s Not. Your. Fault.  And you will find happiness again.

Just, maybe not in the way that Hansel and Gretel end things…

Ultimately, it’s like we learned in Nightbooks — there’s nothing wrong with reading horror stories, as long as they’re not glorifying violence, and as long as you under-stand the difference between fantasy and reality.

Basically, DON’T TRY ANY OF THIS AT HOME, KIDS.

Were those terrifying enough for you?  Are you inspired to take a closer look at any of these grim tales, or do you prefer to stick to the brighter, cozier Frozens and Moanas?  I certainly don’t blame you if you’re in the latter camp.  In fact, I may just need a dose of glittery, non-zombie unicorns myself, after reading that last book.