Here’s another, spookier Cinderella tale set in an old mausoleum.  Like Cinder Hazel, Cinderella Skeleton lives by a different standard of beauty — desirably decrepit, fabulously foul, glorious in her ghastliness.

Cinderella Skeleton
Was everything a ghoul should be:
Her build was long and lean and lank;
Her dankish hair hung down in hanks;
Her nails were yellow; her teeth were green–
The ghastliest haunt you’ve ever seen.
Foulest in the land was she.

And of course it’s Twoo Wuv when she meets Prince Charnel…whoooo’s a bit disturbingly aggressive in his amorous advances, yanking off not only her shoe, but her whole foot as she hurries home.

Yes, I know they’re skeletons and it’s supposed to be funny, but you can’t blame a 21st-century reader for questioning these things…

Aaanyhoo, the illustrations are delightfully creepy, a clashing combination of grayscale graveyards and screaming splashes of color.  I was absolutely dazzled by Cinderella’s moon-bright, lacy cobweb gown, with a single dandelion crown, and neon pink fireflies all around.

I give this one a 4.75 out of 5 pumpkins turned to funeral wagons.

This is a seasonal twist on a Russian fairy tale about a gardener who learns the value of working together, and that even the smallest creatures can be extremely helpful.

And when it finally stopped growing, the pumpkin was too large for one person to lift  But is the witch willing to ask for help if it means sharing the pie?

This would be a perfect story to read after a day of pumpkin carving and pie-making.  I give this a 5 out of 5 massive mummies.

Another witchy twist on a classic tale.  The Little Green Witch teaches her friends the value of hard work, reaping the rewards all by herself after they refuse to help her prepare the pumpkin pie.  And then she adds one more twist at the end, just to spite the lazy louses.

The character illustrations are adorable, from the cheerful witch to the cuddly gremlin, and even the twist at the end is mild enough for the youngest readers.  It’s another fitting tale for a day of pumpkin prep.

I give this a 5 out of 5 loads of unhousework.

Disclaimer:  This one is a bit different — it’s not a twisted fairy tale in the same way the other books are.  I am not claiming any expertise in Latin American cultures in general, or Mexican culture in particular.  I realize I am speaking from an outsider’s perspective.  I chose this book because it’s a beautifully written and illustrated biography that offers fascinating information about pre-Columbian mythology that has been incorporated into the religious traditions of late October/early November.

The Latin American Day of the Dead celebrations, which occur from October 31st to November 2nd, are a re-incarnation of pre-Columbian mythology, mixed with European Catholic beliefs.  The Aztec people had a month-long tribute to the god and goddess of death, Mictlantecuhtli and Mictecacihuatl.  After the Aztecs were conquered by the Spanish, their traditions were incorporated into the European celebrations of All Hallows and All Saints.

One of the big features of Dia de los Muertos is the calavera, or skeleton imagery.  These aren’t scary skeletons, though; they’re cheerful beings that love to party as hard as they did on the other side of the grave.  And some of the most famous calaveras were drawn by Don Jose Guadalupe Posada in the late nineteenth century.

This book is a really neat re-creation of Posada’s life, fabulously illustrated not only with Posada’s original artwork, but Duncan Tonatiuh’s distinct illustrations.  It’s all swirls and circles and bold colors, and it’s sure to bewitch even those readers who haven’t learned to read yet.

I give this a 5 out of 5 top-hatted skeletons riding bicycles. 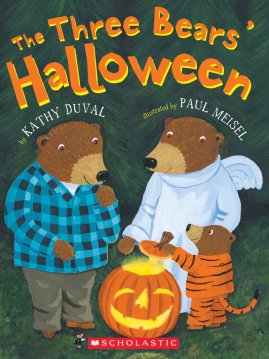 This is a cute companion to the Goldilocks story, which teaches that…uh… turnabout is fair play?  While trick-or-treating one Halloween, the three bears find a seemingly abandoned spooky house.  Clearly not having learned anything from their own experience with housebreakers, they sneak inside and eat the popcorn spiders and break the chairs and dive into the beds.  But who’s that tip-toeing up the stairs behind them, with a terrifying “TEE-HEE-HEE!”?

The acrylic artwork is adequate — I may have been spoiled by much funnier bear illustrations in books like The Bear That Wasn’t There and the Fabulous Forest, or Children Make Terrible Pets.  I do love Paul Meisel’s illustrations of the other woodland critters dressed in their own Halloween costumes.  But I wasn’t as wowed by the main characters.

I give this a 4 out of 5 squirrels dressed in superman capes.

Nikola-Lisa is known for his picture books that celebrate American diversity, and this one is no different.  It’s a fairy tale mash-up that takes place at a downtown hip-hop Halloween ball, attended by characters of all colors.  From Tom Thumb, to Li’l Snowy, to Sweet Pig, to Li’l ‘Rella, these storybook socialites know how to shake it.  This story is so full of energy, it’ll be hard for readers to sit still while singing the refrain.

The oil-paint illustrations are wild and upbeat, and perfectly match the jazzy mood — the whole environment is in on the party, from the grinning crescent moon to the giant cat with music note eyes to the swaying grandfather clock behind a boogie-ing Cinderella.

I give this a 5 out of 5 scat-singing pumpkin-headed MCs.

On, banshees!  On, bogarts!  On, skeletons and spooks!  Fly, my pretties!  Leave your favorite spooky fairy tales and October traditions in the comments!  Do you sing the praises of pumpkin spice, or are you already sick of Starbucks’ fall menu?  How early do you start to spook out your house?