The greatest Independence Day party ever

And by Independence Day, I mean the Lithuanian one, of course.

The ultimate expression of Lithuania’s year-long 100th anniversary celebration happened the first week of July in Vilnius, and hardcore LT fan that I am, I was there to see it in person, along with my parents and brother — with a few side trips thrown in, including a selkie-searching mission in Galway, Ireland.  So, if you’re in the mood for some vicarious bookish and historical traveling, follow me to a land of leprechaun houses, 20th-century wizards, bridge-guarding mermaids, and majestic music festivals!

If you want to go directly to the LT100 portion of this post, skip to page 2.

Searching for selkies in Inis Mór

The first stop on the great EuroTrip 2018 was Galway — partly because it’s the setting of one of David Thomson’s seal story hunts in The People of the Sea (reviewed here), and partly because it’s going to be the setting of one of my own writing projects.  Thomson stopped on the island of Inis Meain (Inishmann), the middle of the three Aran Islands, where he heard the stories of the ominous Black Ledge where no seals gather; of the legendary Coneely family turned to seals; and of the fisherman who saves himself from drowning with the help of an axe, a hook, and a knife.

This being our first trip to Galway, we decided to try out the bigger of the three islands, Inis Mór (Inishmore), because it has some of the most famous historical sites, and the tour description suggested good views of a resident seal colony.

And on that note, we were absolutely in luck!  After driving past the labyrinth of stone fences, the ruins of the Seven Churches (the cemetery is apparently still active), and even a leprechaun house (an Aran Islands tradition meant to bring luck to a household), our mini tour bus stopped at a look-out point where we could watch the local seal colony!  There was a small herd sunning themselves at low tide, chillaxing in the common “banana pose.”

Channeling David Thomson, I asked the bus driver if he knew any good local seal stories, and I was in luck once again, because he’d just heard one on the radio the other day:

A man from Connemara went out one day, set on shooting a seal that had been stealing fish from his nets.  But when he finally came face to face with the animal, the man saw something in its eyes that changed his mind.  He left the seal alone and went home.  Several years passed with no more incident, until one day, the man was out fishing with his friends, and a sudden storm rose up.  The other boats and their inhabitants were quickly lost, but the man had the good fortune to see a seal ahead of him, which led him back to shore.  It was the same seal he’d spared several years ago, returning the favor.

Doesn’t that sound like just the kind of story Thomson would have heard on the islands?  The tour could have ended right then and I would’ve been thrilled.

But of course we couldn’t leave Inis Mór without seeing its most famous site, the three-thousand-year-old fort Dun Aonghasa, built at the edge of a 300-foot cliff overlooking the Atlantic Ocean. 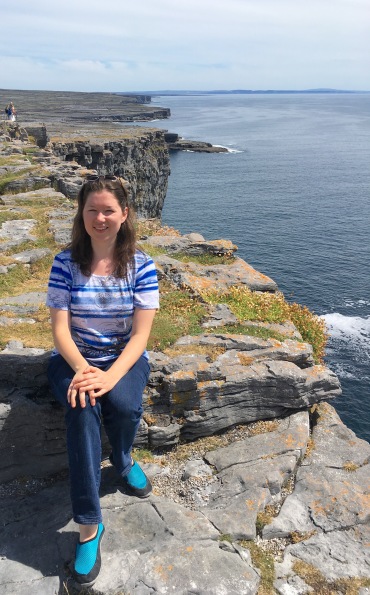 On the one hand, it’s nice that there are no fences ruining the view, but on the other hand, holy squid that’s a long fall to a watery grave…

Full of inspiration, I made my way back down to the Kilmurvey Craft Village for some honeycomb ice cream, and then boarded the bus for the trip back to Kilronan and the ferry back to Galway.

Wizards and suffragists in Kent

The next stop on our trip was Kent, England, where we spent a day with my cousin Paulius and his family.  To Potterheads, Kent is significant as one of the places we Muggles could see the celebrations, in the form of shooting stars, of Voldemort’s first defeat.

A few other literary connections in the Kent area:

Fans of Kate Beaton’s Step Aside, Pops may be interested in knowing that Kent was home to nineteenth-century novelist and suffragist Sarah Grand, who coined the term “New Woman” for those badass ladies who smashed the Victorian-era patriarchy.  The kind of woman satirized in cartoons featuring velocipeding maniacs bowling over poor, unsuspecting gentlemen. 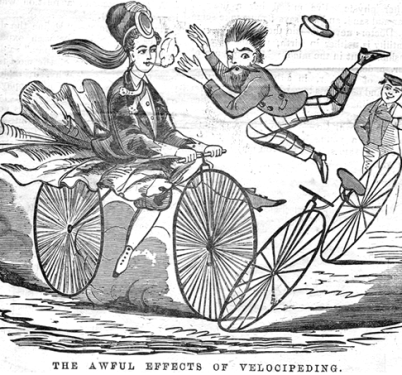 Cartoons which Beaton, in turn, satirized in Step Aside, Pops. 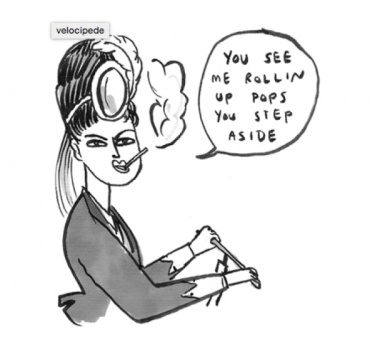 And, of course, being in England, it was absolutely my duty to stop into a Waterstones Bookstore for a copy of Harry Potter and the Philosopher’s Stone.  Speaking of which, Happy 20th anniversary to the American edition of Harry Potter!  My local library had an amazing Potterfest, complete with Quidditch games in the courtyard and magic shows in the meeting rooms, Honeydukes in the hall and wizard tournaments in the YA wing.  I also attended my very first Wizard Rock concert, featuring Tonks and the Aurors. #yesallwitches 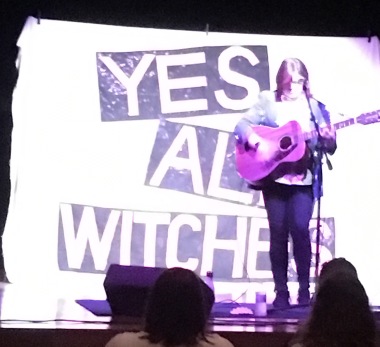 Have you attended any good Potter parties this year?  Tell me all about it in the comments!

Meanwhile, onward to the main event!