That thing is this book.

Rating:  5 out of 5 tiny carrots that aren’t ready to grow up and be lunches yet.

Yes, it’s partly a political parody that explicitly mentions Vice President Mike Pence by name and says he “isn’t very fun,” but it’s also just a lovely children’s book about two bunnies who fall in love and fight prejudice to be together.

You see, as former Daily Show correspondent John Oliver explains in this segment from Last Week Tonight (warning: some very salty language), Vice President Mike Pence has not been a friend to the LGBT community.  As governor of Indiana, he signed a law making it legal for Indiana businesses to discriminate against LGBT people.  As a member of Congress, he actually opposed anti-discrimination bills.  He’s argued against LGBT people serving in the military.  His views on conversion therapy are, at best, unclear.

So, when Mr. Pence and his family wrote a book about their bunny, Marlon Bundo, in which Bundo teaches children about the awesome job the vice president is doing (and one of the stops on the Bundo book tour is at an organization that promotes conversion therapy), John Oliver and his team decided to tell their own story (just in time for Easter, too!) about bunnies doing their civic duty to promote love and equality and respect for people’s differences.  And they’re donating the proceeds to the Trevor Project and AIDS United.

Now, to be fair, I did read the original Marlon Bundo book, and it was a nice lesson on what the vice president does on a daily basis, and the watercolor illustrations were pretty. 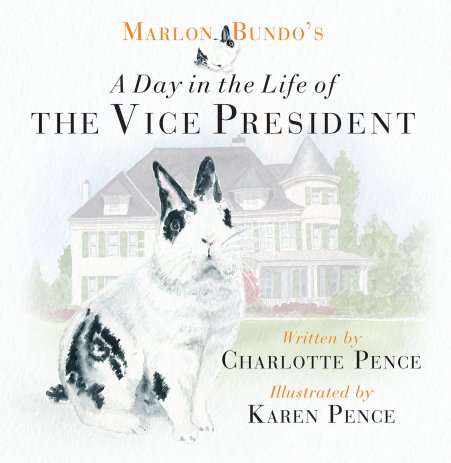 But it’s not very kid-friendly.  Honestly, it does make the vice president sound Very Boring.  Sure, it tries to reel kids in with a big bunny on the cover, but Marlon Bundo barely features in the rest of the illustrations.  They focus more on the D.C. buildings and landscapes, with the titular bunny shrunken and relegated to the background.

And the story itself focuses on such dry, technical aspects of the vice president’s day.  How many little kids would really care that the vice president gets his morning coffee from the Naval Enlisted Aides, or that his second office is in the Eisenhower Executive Office Building (or “EEOB,” as Marlon Bundo adorably calls it), or that he has a painting by T. C. Steele?  Sure, it’s important for kids to learn about how their government works, but you have to present it in a way they’ll relate to.  And no, it’s not enough to try to dress it up in rhyming verse.  All a kid is going to see is:

You know what kids do relate to?  Feeling different, and wanting to be treated fairly, and knowing who you really like spending time with.  And you know what little kids want to see in a book about a bunny?  BUNNIES.

Adding more friendly animal characters also helps, and you get extra points for giving them funny names like Scooter (a turtle) and Pumpernickel (a badger) and Dill Prickle (a hedgehog) and Mr. Paws (a very good dog).

This is what kids are going to respond to.  These are the kinds of lessons we need to be teaching them — that our differences make us special and worthwhile, and that we don’t need to let mean stinkbugs make all the rules.

This book should definitely be added to lists of the best LGBT picture books.  Now, go and get yourself a copy of the Better Bundo Book! 😀