Tales from the land of the Nemunas

Back in 2013, I wrote a post on some of my favorite Lithuanian children’s stories.  Today, in honor of the March 11, 1990 re-establishment of Lithuanian independence (Yep, Lithuania actually has two independence days! 😀 ), which re-asserted the Declaration of Independence from 1918, I’d like to share some (mostly) newer collections of folk and fairy tales I’ve gathered in recent years. 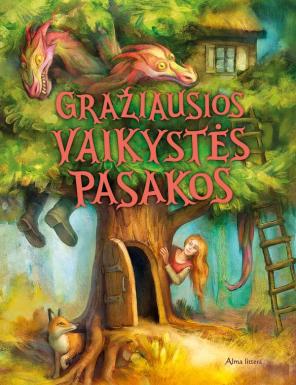 My grandmother brought this book back from her last trip to Lithuania in 2014.  It’s a collection of not only classic Lithuanian tales, but also Grimm’s and other fairy tales translated into Lithuanian.  The best part is the artwork by Rimantas Juškaitis — bright, expressive illustrations of laughing rabbits, dancing storks, and nine-headed dragons.  My favorite illustration is of a girl and her magic cow, in the story “Karvė Verpėja” (The Thread-Spinning Cow).

It’s a Cinderella story in which a girl is mistreated by her stepmother, who gives her the impossible task of perfectly spinning flax without a spinning wheel.  A cow comes out of the field and offers to help, if the girl will just put the flax on her horns.  That evening, the cow returns with the flax all spun into thread.  Of course the stepmother finds out the girl’s secret and kills the cow, but before she does, the cow tells the girl to bury the first drop of blood in the earth where it falls, and bury the rest of the blood in the garden.  Where the first drop of blood fell, a well appears that serves only wine, and where the rest of the blood was buried, a magic apple tree grows.  Of course a prince passes by and only the orphan girl can serve him the wine and apples, and he takes her away to live happily ever after with him.

If this story sounds familiar, you might have read the Grimms’ tale “One Eye, Two Eyes, and Three Eyes,” in which only the mistreated two-eyed sister is able to pick the golden apples from a magic tree that grows from the remains of her magic goat, and is thus chosen by a passing knight for his bride.  The motif of the magic cow is also found in other stories, like the Chinese “Beauty and Pock-Face,” the Ethiopian “Magic Cow,” and the Serbian “Pepelyouga.”

Other fun stories in the collection include “The Orphan Elenytė and Joniukas the Sheep,” 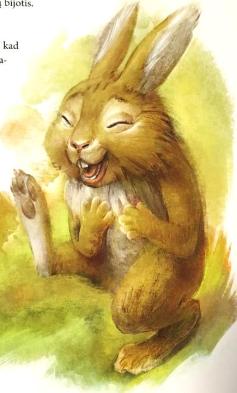 in which a girl has to save her brother from an evil witch after he drinks water from a sheep’s footprint and turns into a sheep himself; “Perkūnas and the Grand Duke’s Daughter,” in which a young woman marries the god of thunder, a story with elements of “Cupid and Psyche” and “East of the Sun, West of the Moon”; and “The Sky is Falling!” in which a skittish cat sends the whole forest into a panic with news that the sky is falling, when it was really a cabbage leaf that fell on its tail.

Honestly, my favorite part of that last one is the funny rhyming name each character gets — the fox is Lapė snapė, the rabbit is Kiškis tiškis, the bear is Meška pleška, the wolf is Vilke pilke…

This next collection I found in my grandmother’s home library, an anthology of old Lithuanian folk tales called “Tales From the Land of the Nemunas” (the Nemunas is the largest river in Lithuania, originating in Belarus and flowing through Lithuania into the Baltic Sea). 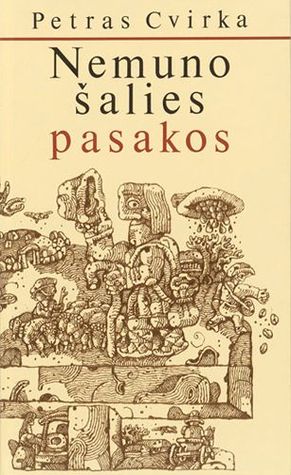 Petras Cvirka
Tales from the Land of the Nemunas
Vilnius: Vyturys, 1988

Like with the former collection, half the fun of reading these stories is seeing the wild illustrations — these ones by Algirdas Steponavičius.  These are earthy, abstract, Picasso-like drawings of wild animals and people bonded with nature:

The stories are mostly animal tales, reflecting the forest-filled landscape of Lithuania, but also tales of humans and their daily antics.  They also reflect the socio-political climate of the time when the stories were created, and how the Lithuanian storytellers felt about their foreign neighbors.  In one story, a man from Žemaitija tricks a German by selling him a “magical” letter-carrying rabbit, a “doctor” fox that can make hens lay more eggs, and a “magical” hat that can get you free meals at any tavern.  Of course these “magical” items don’t work, and the Lithuanian ends up making a fool out of the German.

Other stories use anthropomorphic animals to reflect aspects of human life, like the tale of a rabbit steward who housesits at a wolf’s farm while he’s away, only to let in a wild,

partying fox and her family who overstay their welcome.  In another story, a rabbit invites several other animals over to celebrate the christening of his children.  The wolf tries to make off with the baby rabbits, but the other animals beat him up, and from then on, no one invites wolves into their homes.  Still another story humanizes Nature itself, depicting the Sun, Moon and Wind in an argument over which of them should be invited to sit at the place of honor at a man’s table.

These are stories of hard-working (and hard-scheming 😉 ) people who really live off the land, depending on the fields and forests and their creatures for their livelihoods.  These are stories of people who are one with the environment, seeing themselves in the animals and elements that surrounded them, seeing their fellow creatures as fellow people rather than merely tools or prey.

Finally, I bought the following two books during my own trip to Lithuania in 2009.  One is the legend of how the capitol city of Vilnius was established:

Hundreds of years ago, in the sacred region where the Vilnia river meets the Neris, the Grand Duke Gediminas and his hunting party followed a great bull.  It took until nightfall to take down the bull, and by then it was too late to return home, so the grand duke made camp in the region known as Šventaragio Slėnis (the Holy Horn Valley).  That night, the grand duke dreamed of a great iron wolf that stood at the top of the forested hill and howled with the voice of a hundred wolves.

The next morning, Gediminas called on the great oracle Lizdeika to interpret the dream.  Lizdeika told him the wolf represented a great tower that must be built on that hill, and the hundred-wolf howl represented a mighty city that would become the nation’s capital.

Setting is very important in this story, both physical and historical, as the main story of Grand Duke Gediminas and his prophetic dream is prefaced by a history of the landscape as it developed from the Ice Ages to the Medieval era, glaciers carving out the holy hills and valleys, the lakes and rivers.  The hill and valley at the crossroads of the Vilnia and Neris rivers became a sacred place where the ancient pagans built their shrine of standing stones to the Lithuanian gods, where great leaders were buried, where priestesses sang their ritual songs.  It was there that Gediminas’ advisor Lizdeika was found as a baby in an eagles’ nest, in the branches of a great oak tree, and grew into a wise oracle and even sorcerer who could read the land and sky, foretell the future, and interpret dreams.

This is one of my favorite interpretations of the Vilnius legend, as it stretches beyond the main story to show the physical, historical, and mythological contexts of Gediminas’ dream.

The other book is a literally a fairy tale, the story of a beautiful green-eyed fairy who helps a young woman save her fiancé, kidnapped by an invading army.  Like The Legend of Vilnius, this one is heavy on setting, painting a vivid, sacred picture of the landscape and its importance to the people who live there.

The Fairy takes place in the northeastern highlands region of lakes, a region of gods and fairies that, hundreds of years later, would become the first of Lithuania’s national parks.  So important were the nature gods and folk heroes to the people that they named their children after them — the heroine is named after Austėja, the bee goddess, and her lover is named Ažuolas — perhaps after the son of Eglė, Queen of Serpents, who became the first of Lithuania’s great oak trees?

Ažuolas and Austėja are their community’s power couple, as perfect as a pair of doves, and as is the custom in that region, they take a trip together to a sacred pond in the middle of a lake island where fairies cast their spells, sing their songs, and tend their babies in the magic lily cradles.  Beneath a nine-branched linden tree, Ažuolas and Austėja profess their love to one another and pray to the goddess Laima to smile down on them.

But soon after their return to the mainland, before they can complete their marriage ceremony, a foreign army invades the land, kidnapping the young women, including Austėja, and taking Ažuolas prisoner when he fights to set her free.

In order to save her lover, Austėja will need to complete an impossible, forbidden task, a sin against the fairies.  It seems all hope is lost, but the fairies and the surrounding lake spirits have their own plans for how to save the land from the invading army.

This is truly a lovely ode to the Lithuanian mythology and landscape, a new fairy tale to explain the history of the region that would become Aukštaitija National Park.

What about you, Postcardians?  What are some of your favorite legends and fairy tales from your own cultural heritage?  What do those stories say about the people and landscape that inspired them?

Today, I’ll leave you with another rendition of the Lithuanian national anthem, set against a backdrop of Lithuanian rivers, lakes, and forests: