It’s been a month of raising the dead, hasn’t it?  I’ve been resurrecting my old Insatiable Booksluts posts, and now I’ve decided to delete my LiveJournal account.  Apparently, they’ve been bought by a Russian company and now require users to follow Russian internet rules, which is very bad news for LGBTQIA content and political commentary (I know, I’m pretty late to the party here; I hadn’t updated my LJ blog for a while, and today was the first time I tried to log in, and that’s when I was met by the new user agreement that kept referencing the Russian Federation).  Before I hit the delete button, though, I transferred my favorite posts to my new blog, Same Story, Different Versions, where I will be discussing adult books and other topics that don’t really fit here at Postcards.

As I was going through my LJ posts, though, I found one from 2010 that actually would fit in here, especially since it concerns a Windling/Datlow anthology (I’ve discussed other W/D fairy tale anthologies here, here, and here).

Time for a wander down memory lane!

Originally posted at LiveJournal on Sept 27, 2010

I’ve been really into folklore and fairy tales lately — especially new interpretations/twistings thereof — and one of the books I’m reading is The Faery Reel, an anthology edited by Terri Windling and Ellen Datlow.  Windling and Datlow invited certain fantasy writers to submit new stories that overcome the cliche depictions of fairies (“No butterfly-winged sprites”). 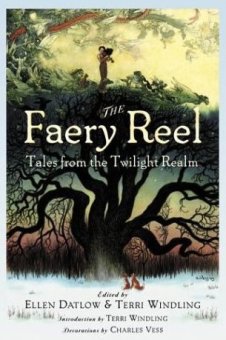 The first few pages were sweet:  sixteen-year-old Cherry is baby-siting her little cousin Annalise, who likes to “scream for faeries” — she and her friend scream out the window, because that will make faeries come to them.  Cherry thinks it’s just a cute game and waits for the girls to fall asleep so her boyfriend Robbie can come over

Cherry and Robbie have a really strong connection, but Cherry is afraid to “take it to the next level” with him.  He — and the rest of their school — think Cherry’s already had sex because of a rumor that Cherry decided not to deny.  So whenever she and Robbie are alone, she stalls and  makes excuses.

Cue the fix-it faeries.  Cherry is back home, sans boyfriend, and suddenly sees the boy faery in her room.  The tiny, blonde, leather-jacket-wearing faery (yes, my Jareth senses were tingling 😉 ) glares angrily and accuses her:  “Liar.”  Then, “Virgin.”  Then his wise, graceful girlfriend appears, and they all but have sex in front of Cherry, who feels really turned on, but still unsure.

The faeries leave a bowl of mushrooms in the kitchen the next day, but Cherry throws them out and that’s really bad.  The faeries trash her room because those were magic mushrooms (yeah, that doesn’t sound suspicious at all) and they were a gift that could have taught Cherry something.  Well, they can’t tell her now, can they?  Instead they fondle each other again and talk about seasons needing to change, and how no one can stop that change from coming.

Bad Cherry — bad girl for not telling Robbie she’s a virgin!  Bad girl for being nervous about sex, and not sure if she really wants to do it already!  Reminds me of the Nostalgia Chick’s “Hocus Pocus” review XD

Ok, Steiber’s story wasn’t as conspicuous as “Hocus Pocus” in its message about the eeeeevil (or at least stupidness) of virginity.  To give him a lot of credit, Robbie is a very understanding boyfriend, and lets Cherry know that he’ll  never push her into having sex if she doesn’t want to.  Amen to that.  But the faeries are not so easy-going, and their seasons-must-change message sounds more like “You should be ashamed of your nervousness about sex.  You’re sixteen already, what are you waiting for, prude?”

Honestly, when I finished reading, I felt like finding Steiber’s contact information and writing an angry e-mail.  I slept on it instead.  I don’t want to come off sounding like some extremist who objects to a story because it has a “subversive” message.  It’s not the encouraging-teens-to-have-sex part that bugs me as much as the making-girls-feel-ashamed-if-they-haven’t-done-it-and-don’t-want-to-yet part.  To me, that’s worse than what I hear about Twilight (i.e. its portrayal of a girl whose boyfriend is her identity and who practically begs him for sex).

Then there’s the writer part of me who would feel guilty telling another writer that her artwork is “wrong.”  What if my interpretation of the story’s message is just that — my interpretation?  This is what Steiber herself says about the story, in her afterword:

As for the subject of the story, faeries have long been connected with the forbidden, which may be why so many of the old stories and ballads about them contain an element of seduction.  In addition to being tricksters and babynappers, faeries are sexy.  So when I saw that Cherry was stuck, afraid of her own sexuality and yet also feeling the power and the magic of it, I thought it would be interesting to see what the faeries might tell her.

When you put it that way, it doesn’t sound so bad.  I love Labyrinth, don’t I?, and the implied theme there is a girl’s introduction to a world of sexual power (all packaged in a tight pair of dance magic pants).  It’s just…couldn’t Cherry have gotten a less accusatory, less shame-on-you lesson about the facts of life?  A lesson that would sound more like “It’s a beautiful choice, and nothing to be afraid of if you do it with a caring person” and less like “You have to do it sooner or later, so quit whining and give in.”