Ghastly stories for the biggest scare-seekers

Do you keep a night light on on Halloween, just in case?  Do thoughts of the undead keep you unrested?  Or are you all about the vampire bats and the plague-haunted castles and the vengeful murder victims come back to punish the criminals?  If you’re a Halloween thrill-seeker, these next three books may be for you.

The first is a recent work of nonfiction aimed at middle-grade+ readers, while the second and third are collections of literary comics and short stories more appropriate for readers with a higher tolerance for horror. 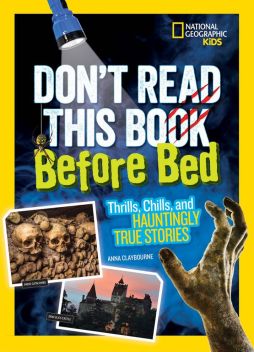 This recent book from National Geographic Kids is an encyclopedia of the world’s spookiest subjects, from the terrifyingly true to the positively paranormal, from zombie ants to presidential poltergeists, with several creepy quizzes in between (“How Woooooooo Are You?” was one of my favorites).  The neatest thing about this book is that each subject is accompanied by a Fright-O-Meter rating that warns readers just how scary that subject is.  Those with a low tolerance for terror might want to stick to the sections on space jelly and déjà vu, while those who don’t mind more mind-bending subjects can check out the sections on scary skin-dwellers and the Tower of London.

Though, some of the Fright-O-Meter ratings had me scratching my head; frog rain gets a whopping 10 on the meter, while parasites that eat your tongue and then live on in its place only gets a 2 (well, ok, so they really only affect fish, BUT STILL!!!).  And they actually have a section on butterfly migration.  Butterflies.  Granted, that one gets an understandable 1 on the meter, but really?  Butterflies? 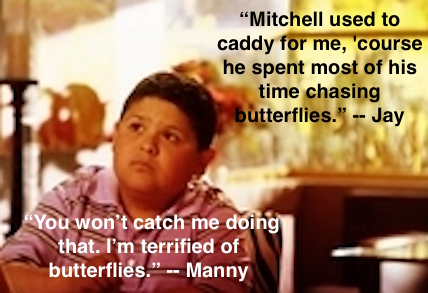 To each their own phobias, I guess.  (Turns out, there is such a thing as lepidopterophobia, or the fear of butterflies.  Who knew?) 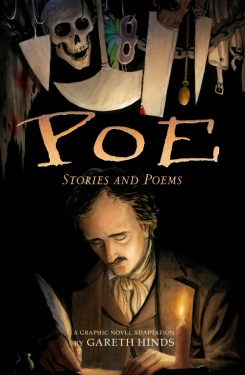 For this collection, Hinds has chosen some of Edgar Allan Poe’s most famous stories and poems to illustrate, from “The Tell-Tale Heart” to “The Cask of Amontillado” to “Annabel Lee.”  What I thought was especially neat was how, before each of the stories, he includes a “Poe Checklist” of the biggest themes in Poe’s work — from angels and demons to creepy animals to guilty consciences (or lack thereof).

I have to say, the art itself took a second reading to grow on me.  At first, I was a little underwhelmed by characters and scenes that looked a bit too cheerful and bright.  This is purely a matter of personal taste, of course, (and maybe a touch of snobbery) but with my reading of the mood of Poe’s stories, I was expecting something more sinister throughout, something that really captures the horror at the center of the story, even in the initial, more benign scenes that build up to the main horrifying scene or event.

For example, the walk through the catacombs in “The Cask of Amontillado” seemed too quick and too well-lit to really give you a sense of growing dread as you go deeper and deeper underground.  And in “The Masque of the Red Death,” the ball certainly looks delightful, but you don’t really get a sense of how desperately outrageous and over-the-top and dream-like it is, in contrast to the ironically simple, yet too-offensive appearance of the final visitor.  It feels like those scenes are rushed-through on the way to the main event, and so you lose the sense of dread that really builds up the scary event.

Where the art does get creepier, though, it’s pretty darn creepy. 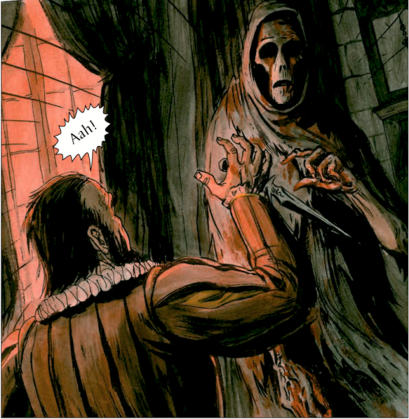 I will say, “The Pit and the Pendulum” was the one story that benefited from being condensed, skipping Poe’s long description of the trial before you get to the torture chamber, which I think already has enough build-up to the horrifying pit and pendulum.  And I really liked the way Hinds depicted the narrator’s exploration of the chamber in a series of wordless chalk-like images against a simple black background.

I also really liked the illustration of the raven in the eponymous poem, with its feathers that transform into skeletal hands and skulls.  That was really cool. 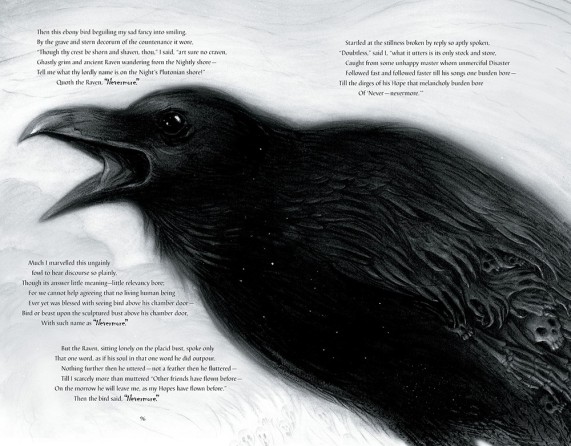 Overall, it’s a good introduction to Poe’s most famous stories and poems.  You get the gist of each story, and you can’t go wrong with images of swarming rats and dismemberment when you want to seriously creep out your readers; I definitely recommend going back and reading the original works, though, to get the full measure of dread and horror. 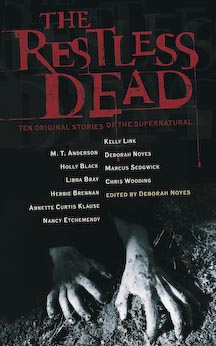 Scare Level:  8.75 out of 10 realizations that you dug up the wrong grave

II’m giving this one such a high Scare Level purely because of “Bad Things” and “Honey in the Wound,” the most gruesome stories in the collection.  You’ve got your devil worshippers, your corpse mutilation, your amputations gone wrong, your homophobic teenage guys who use the idea of being gay as an insult…what more do you need for a truly terrifying Halloween read?

These are stories of the dead not resting in peace, the dearly departed souls who want revenge, or company, or just to play some pranks or keep partying in the living world some more.

A few notable titles besides “Honey” and “Bad Things” include:

“The Wrong Grave,” by Kelly Link — my favorite part was the matter-of-fact, somewhat sarcastic first-person p.o.v. that never reveals who exactly he or she is, other than someone who knows the protagonist from school (I do have a theory), but somehow knows all the innermost thoughts and feelings of Miles Sperry, a doofus who goes grave-digging one night for his recently departed girlfriend (more specifically, for the poems he mistakenly buried with his girlfriend), only to discover he’s dug up some other girl’s grave instead, and now she wants to ditch her dirty digs and follow him around instead.

“The Heart of Another,” by Marcus Sedgwick — This is a Poe-inspired story about a graduate student who recently had heart surgery, and who now finds she has some new abilities and personality traits, along with some really unsettling re-occurring dreams.  Unable to simply enjoy her second shot at life, the narrator becomes obsessed with finding out whose heart she was given.  Except the answer reveals something terrible she might have been better off not knowing.  This was definitely one of the spookier stories in the collection, with a twist as good as the one in “The Wrong Grave.”

“The Gray Boy’s Work,” by M. T. Anderson — This was my favorite story, next to “The Wrong Grave,” because it has the most unique paranormal characters.  Ezra and his family live in a valley visited by singing omens and angelic chariots that give news from the Revolutionary War.  When Ezra’s father leaves to serve, the family is personally visited by a pair of angels, Victory and Despair, one blindfolded and one fanged, who just sort of hang around, being mysterious and a little creepy.  And then, when the father returns, the angels bring forth another spirit, the Grey Boy, to haunt the family for the father’s sins…or maybe it’s not so simple as that.

What about you?  Are you a Halloween thrill-seeker, or do you prefer to let sleeping corpses lie?  What are some of your favorite literary chillers?