It’s that awesomest time of year again, the month for reading spooky, paranormal stories; stocking up on snack-size Butterfingers; and putting together your kick-@$$ October Daye costume.

This month, I’m prepared with several Halloween posts featuring nostalgic middle grade titles, a series of seasonal board books, and (true) stories for the biggest scare-seekers.

Today, we take a look at two haunted house stories from the late 80s and early 90s. Both books feature a move from the “soul killing” city to a small town out in the country—a move celebrated by one protagonist and hated by the other—and historic houses haunted by long-ago tragedies that seem to be affecting the behavior of the new inhabitants/neighbors. 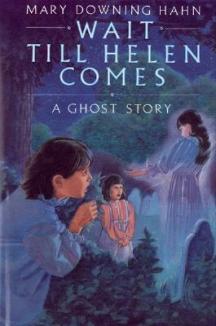 Rating: 3.95 out of 5 hidden graves with your bratty stepsister’s initials carved into the stone

Molly is seriously bummed when her mother and stepfather announce they are moving away from the excitement of Baltimore to an abandoned church in a sleepy small town in Maryland. What’s worse, their new home is next to a scary old graveyard. And worst of all, Molly will have to constantly watch her stepsister while the parents are busy with their art projects. Heather hates her new stepfamily, and is constantly getting Molly and her brother in trouble. But when a local ghost latches onto Heather and beings luring her away from the family, to a dangerous ruin in the woods, Molly realizes that sometimes, the most difficult people are the ones who need the most love.

Mary Downing Hahn is known for her scary stories, and this one is certainly creepy enough, with its focus on a skeletal seven-year-old ghost girl with bluish-white skin and dark holes for eyes. And Hahn builds up the creepiness in other parts of the story, like in the narrator’s contemplation of her own skeleton that would someday lie in a grave, and her eerily beautiful description of the forest, with its “unfriendly” trees that “[brood] like giants on the verge of waking from bad dreams.” [1]

About the same age as Molly when I first read the book, I could definitely feel the unfairness of the whole situation from her perspective – especially the part about her having to miss out on a creative writing class in Baltimore 😦  And I totally hated the way the stepfather, Dave, was so wrapped around his daughter’s finger and always put her interests above the other two kids’ – especially Molly’s. He’d do everything in his power to keep Heather from being upset, but he’d completely dismiss Molly’s feelings.

“Just don’t inflict your own fears on Heather, Molly. You’ve been fretting about that graveyard ever since we moved in here. It doesn’t bother anybody else, so forget it, okay?” [2]

What a jerk, right? Of course, looking back on the story from an adult’s perspective, I can better understand why Dave acts the way he does; he’s grieving over the death of his first wife, and has translated that grief into an obsession with keeping his daughter happy, to keep her from remembering the trauma she experienced. I also better understand Molly’s mother when she seems to unfairly take Heather’s side – she’s trying to be sympathetic to her stepdaughter despite the girl’s hostility, yet she also does try to understand how tough the situation is on her older kids. She sees how important Heather is to Dave, and she wants to make Dave happy, but she also wants to be loyal to Molly and Michael.

Still, even as an adult I was offended for Molly every time Dave scolded her or made fun of her concerns, or when her mother told her she wasn’t trying hard enough with Heather.

The one thing that really didn’t work for me this time was the ending. Not to spoil anything, but it doesn’t make sense, first of all, that the scene in the basement only happens now, after a hundred years. I guess maybe ghost time is a lot slower than living time? It just feels like a conflict that could have been resolved decades earlier.

And the way everything so easily gets better after the climax is a little unbelievable. Certain characters’ behavior just changes suddenly, with no need for professional counseling or anything. Yeah, it’s suggested that the presence of the ghost girl was amplifying the bad feelings between the family members, but there were issues that already existed before they moved out to the country that wouldn’t simply disappear along with Helen’s unfinished business.

Overall, though, it’s a pretty good ghost story. It probably creeped me out more when I was a middle-grade reader, but it was still pretty enjoyable now. 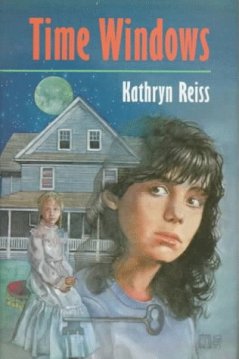 Rating:  5 out of 5 terror-inducing waves of magnolia

Now, this was an awesomely eerie, unique haunted house story! Time-warping dollhouses, airtight hiding places, an old house that has some sort of hostile influence over its inhabitants, and all around, the nauseating scent of magnolia blossoms. Why is Miranda so afraid every time she smells magnolia blossoms? The extreme sense of unease and déjà vu build up throughout the story until Miranda finally figures out why her new house seems to have such a negative effect on the people who live there.

Miranda is thrilled by her family’s move from the overly hectic and crowded New York City to the wide-open spaces of Garnet, Massachusetts. She loves their spooky old house, and is immediately drawn to the attic, where she discovers a dollhouse that is an exact replica of her new home. And then she discovers the most amazing thing of all – when she looks through the dollhouse windows, she sees into the past, watching the lives of the house’s previous inhabitants. She soon becomes obsessed with the dollhouse, determined to find out what exactly happened so long ago that has given the house such a hostile atmosphere.

Besides the spookiness, I loved the juxtaposition of the earlier time periods with the present day attitudes toward women who work outside the home. Even the cold, cruel Lucinda becomes a somewhat more sympathetic character when you consider what a chauvinist her husband is about her wish to be a lawyer or work in business. Contrast that with the present-day inhabitants of the Galworthy house – Miranda’s mother is the one who provides for the family as a doctor while Miranda’s father stays home with Miranda.

And I really liked the history-laced setting; Garnet is a traditional New England small town involved in the Revolutionary War. Miranda lives next door to a family-owned museum that used to be a stop on the Underground Railroad. She watches through the dollhouse windows as a family from the 1940s discusses sugar rationing and air raids.

And this is random, but I always like when stories describe music as something powerful, almost magical. Ok, not actually magical in this case, just emotionally magical — something that can entrance you, that can soothe or stimulate, a dream-like experience.

She didn’t know whether what happened when she played was a strange thing or not—maybe, indeed, all people experienced the same sort of thing when they concentrated on something important to them. But when Miranda played her flute, she would find herself falling into the music, into the story it told. After the first few minutes of warming up, she no longer noticed her fingers on the keys or her mouth on the mouthpiece, controlling the flow of air. Instead, she was off in some other place, listening to the music as if she herself were not playing it, but as if it flowed through her from some other source. [3]

And finally, again not to spoil anything, but the Happily Ever After makes a lot more sense in this book than in the previous one; there’s a much stronger reason things get better so suddenly.

There’s more I could say about this book, but it would be getting too deep into spoiler territory. I’ll just say that I definitely recommend Time Windows to anyone looking for a unique haunted house story.