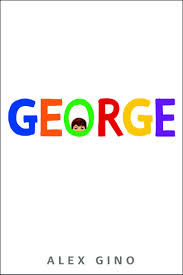 Rating:  5 out of 5 secret magazine collections

This is a fantastic book.  George knows she’s really a girl, even though everyone else sees a boy, and she really wants to play Charlotte in her school’s production of Charlotte’s Web.  Unfortunately, her teacher says only girls can play that role.  But George’s best friend Kelly comes up with an awesome plan to show everyone who George really is.

I love that Gino creates characters like Kelly, who so readily support George, reflecting the kind of society we should be, especially in a book targeted at middle grade readers.  At the same time, Gino also portrays the initially resistant characters as relatable human beings rather than just stock antagonists, showing how people can change their initial perspectives.  We need more stories like this.

The one thing I wish the book had done is make clear that not all girls naturally like or dislike certain things — that some girls like shooter games, that girls can be just as strong and fast as boys in gym.  But that’s my only complaint.

See Alex Gino’s post at Gay YA, about the need for more LGBTQIA in middle grade and younger literature:

There is no age at which it is inappropriate to appreciate people for who they are.  And there is no age before we know ourselves.  We may not have fully formed those notions, but each of us is the only person we know inside and out, and each of our challenges includes finding, respecting, and celebrating that self.

Robin Talley. What We Left Behind. Harlequin Teen, 2015.

Rating:  5 out of 5 uniform pants you’re finally allowed to wear at your all-girls’ high school

Gretchen and Toni fall for each other at first sight, at their junior year Homecoming dance, and quickly become the perfect couple. They never fight, and Gretchen is completely supportive of Toni’s exploration of T’s gender identity. Then, the night before they head off to college, Gretchen drops the bomb that she’s not actually planning to go to Boston with Toni; she’s going to New York instead. Toni tries to pretend everything is ok, but this starts a rift in the relationship that grows as they make friends with different groups of people. Toni’s new friends challenge T’s beliefs about gender pronouns, labels, and where T is on the transgender spectrum, and T doesn’t share all of this with Gretchen the way T used to, and Gretchen is too scared to ask questions in case she says something wrong.

Lezbrarian reviewed this book here, and like her, I liked how Talley portrays various people on the “queer/gender identity spectrum … in a way that feels real and immediate and relatable.” There are characters like Derek and Andy and Eli, who know exactly who and what they are, and there is Toni, who is figuring that out from day to day.  And the book is non-judgmental as it portrays both Toni and Gretchen’s thoughts on these issues.  They’re both figuring out how to be individuals as well as a couple, how to define themselves in relation to other people, how to ask for what they really want out of life instead of just following everyone else’s expectations.