I’ve been reading a lot of short stories lately, haven’t I? Most recently, I’ve been going through the anthologies of re-imagined folk and fairy tales edited by Ellen Datlow and Terri Windling. These are my favorite stories: 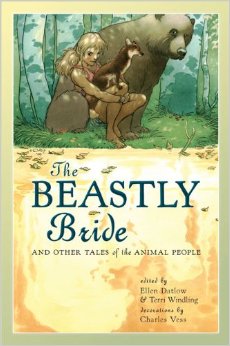 A Wolf at the Door and Other Retold Fairy Tales. New York: Simon & Schuster Books for Young Readers, 2000.

She does not know where any tale waits
before it’s told. (No more do I.)
But forty thieves sounds good, so forty
thieves it is. She prays she’s bought another
clutch of days.

We save our lives in such unlikely ways.

This and several other Datlow/Windling anthologies are collections of adult fairy tales – stories “that remold our most cherished childhood fables into things darker and sexier, more resonant and appealing to grown-up tastes and sensibilities.”*

I would’ve liked those Selkie and Roane elements to be more explicit, but the hints made me happy enough.

The story intro dubs this a tale inspired by “Rumpelstiltskin”…”But I wouldn’t go so far as to say that ‘Marsh-Magic’ is based on ‘Rumpelstiltskin’,” says McKinley. “It’s more like one of the bigger turnips that went in the pot.”