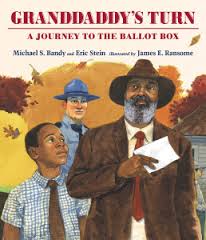 It’s interesting how timely this story still is, with voting rights being discussed in Congress and in the 2016 presidential campaign.  The book shows how difficult it could be, despite federal laws, to fulfill one’s right to vote if local officials considered the voter “undesirable.”  The final message is that justice does eventually reward the patient.  Now, not everyone will agree that one has to just be passive and patient with injustice; while the afterword discusses the civil rights movement, the story itself doesn’t address the need to fight for laws to change.  Still, the overall tone is hopeful, if also bittersweet.

The Death of the Hat: a Brief History of Poetry in 50 Objects.  Selected by Paul B.

From the Early Middle Ages to the Postmodern and Contemporary periods, from Rumi to Basho to Wheatley to Plath, Janeczko gathers together poems about candles and cobwebs, sticks and snowflakes and street lanterns, complemented by Chris Raschka’s fun, vivid watercolor images.  And Janeczko’s Introduction offers a helpful overview of the literary eras included, even acknowledging the collection’s limitations (like the much greater concentration of male and Western voices). 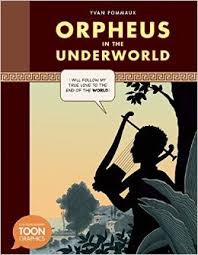 A semi-comics-style adaptation of the story of Orpheus and Eurydice.  It includes  pronunciation footnotes throughout the story, and at the end is a trading-card-style guide to the major characters, plus an annotated index with even more info on the characters, as well as the places mentioned in the story.  So far, the Toon Graphic Mythologies series includes this book, and Theseus and the Minotaur.

Marie-Sabine Roger and Anne Sol.  Of Course They Do! Boys and Girls Can Do

Roger and Sol offer a fantastic rebuttal to gender stereotypes, matching their text with photos of boys dancing and cooking, girls playing sports and working with cars, and more.  I love the cheeky, conversational tone (“Boys don’t dance … What? Of course they do!”) that challenges readers to change their way of thinking about what boys and girls are capable of.

This is a sad, sweet story that might help children dealing with the death of a loved one.  Xiao Le spends a day helping his grandmother when she is sick.  When she dies, he helps his mother feel better by imagining what Grandma is doing in heaven:

…whenever Xiao Le took a walk with his mom and saw the golden setting sun, a big smile would come onto his face.
“Look, Mom, Grandma is frying an egg in heaven!”
When the moon rose, Xiao Le would exclaim happily, “Look, Mom, Grandma has turned on the light! It’s evening in heaven, too!”

Ed Emberley’s woodcut illustrations match the words of this old folk song, which counts the animals filing into Noah’s Ark (“The animals came in four by four, The hippopotamus blocked the door…”).  There are various versions of the song; the one I grew up with was Raffi’s “Who Built the Ark?”

Tessler’s aunt used to tell her this folktale about a man named Abukacha, who tries again and again to get rid of his old, worn out shoes.  But somehow the shoes keep coming back!  I love how Tessler mixes in her family’s old photos with her illustrations, creating a humorous effect to match the goofy story.

This is the true story of Kamkwamba, who, when he was fourteen, built an electricity-generating windmill from items found in a junk yard.  The windmill was meant to help irrigate his family’s maize fields when there wasn’t enough rain.  This is one of those stories that makes me think, I will never complain about anything again… because here’s a guy who didn’t just give up when a severe drought decimated his family’s income and he was forced to drop out of school.  He went to the library and taught himself how to build something to fix the problem.

Kamkwamba appeared at a TED conference in 2007, and was interviewed by Jon Stewart on The Daily Show in 2009.

Lulu the Ladybug Girl and her trusty sidekick, Bingo, are on a camping trip with their family.  In the woods, they discover such wonders as a “gnarly old wizard,” a “galloping giant turtle,” lake mermaids and buttercup fairies.  It’s an adorable story about a girl with a big imagination and persevering attitude when things don’t go exactly right.