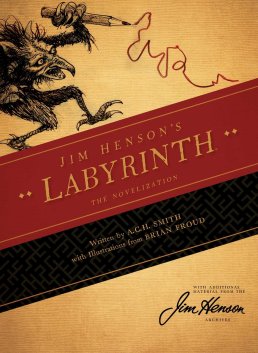 After years of sighing at the $40+ copies of the out-of-print Labyrinth novelization, I was thrilled to hear about the newly released hardcover edition (for just $20!). And for the most part, it was awesome! A.C.H. Smith did a fine job fleshing out the story with Sarah’s thought processes and evolving ability to think from other people’s points of view instead of just her own.

Sarah steeled herself to approach closely. She felt its warm breath on her face as she stood beside the beast and twisted herself down from the waist to get a look at it the right way up. What she saw surprised her. The great mouth that had looked so grim, with its turned-down corners, had actually been, of course, smiling sweetly at her. Gosh, she reflected, it must often be like that for poor Toby, when people lean over him from the pillow of his crib. [1]

What I feel more uncomfortable about is the way Smith portrayed the Fireys. With lines like, “Well, that ain’t no problem”… and “Holy Mo!”… and “Why, shoot. We ain’t that wild”… and “Ain’t we a-showin’ you a good time?”… is anyone else reminded a bit of the Dumbo crows? In the movie, the Fireys were fun dancing Muppets, but in the book they’re portrayed as uneducated hooligans – “just crazy good-timers, out of their skulls.” [2]

One other thing I didn’t like was the lesson Sarah took from the ballroom scene – that “[s]omehow, it had all been her fault. Those men who pawed her, Jareth trying so rudely to force a kiss upon her—had she been truly innocent, they would not have behaved like that toward her, would they?” [3] Sure, blame the victim of sexual harassment, because she must’ve somehow deserved it.

Other than those two problems, the book stands pretty well by itself as a fairy tale coming-of-age quest. And after the story itself, we get to see some of Brian Froud’s goblin illustrations and bits of Jim Henson’s journal, where he plotted his initial concepts for the movie – like a scene he imagined with a king and jester trapped in a cage, held by a “large Buddha type figure.” How neat would that have been?