Dear Authors: Not every YA heroine needs a boyfriend

I like a good literary romance well enough.  Aw, who am I kidding, I’m the shippiest shipper in all of shipdom.*  I was on Team Ron/Hermione right from Sorcerer’s Stone (I swear I started this post before J. K.’s recent comments ^_^;; ).  Want to know just how Johnlocked I am (of course you do)?  See the “Sherlock” tag in my Livejournal on Same Story, Different Versions.  And “As Long as You’re Mine” was my favorite song from Wicked – next to “Defying Gravity,” of course.

But even I have my limits.  Because for the love of Pete’s sake, if I read another summary that includes some variation of girl-finds-herself-irresistibly-drawn-to-some-“devastatingly handsome charmer” (yoinked that one from Amazon, re: The Unbecoming of Mara Dyer), I will throw a mental fit.

I’m not talking about books in which the romance is the story, or an otherwise integral and organic plot point.  For instance, I consider the “star-crossed lovers” angle in The Hunger Games an important part of the larger goal, which is to stop the Games once and for all. I’m talking about those books in which the romance feels tacked on.  Books in which the primary plot is interesting enough without adding a love triangle or ill-fated coupling.  How many times do I have to get all intrigued by a potential TBR pile addition, only for the jacket flap to add:  Oh, and the heroine also has to choose between the loyal best friend and the exciting but possibly dangerous bad boy…?

Now, I’m focusing on male love interests because that seems to be the most common trope.  I’d actually be interested in seeing more stories with gay or bisexual women.  The following isn’t technically YA, but Seanan McGuire’s October Daye series (post An Artificial Night) is a great example — particularly her e-novella, In Sea-Salt Tears.  McGuire writes relationships like Jazz and May’s, and Liz and Annie’s, like there’s nothing unusual about both partners being female.  Well, ok, Toby is surprised at first when she meets Jazz, not having considered that her…let’s say surprise twin sister…might be a different orientation than Toby herself.  But after that it’s treated like no big deal.

Just to be clear, this isn’t an anti-men rant.  It’s an anti-cliché rant.  It’s an anti-“token romances”** rant.  What’s a token romance?  One of the best examples is actually in a movie adaptation; the book itself didn’t have the romance element in question.  In Disney’s The Chronicles of Narnia: Prince Caspian, the movie-makers decided to make Susan and Caspian an item–I mean, if a few flirty lines and one kiss count as an “item.”  But hey, at least that’s more interesting than just a teenage girl using her mad archery skillz to help save a kingdom, while struggling with her faith in magic vs. the desire to be more grown-up, right?

Oh, that’s right — Susan’s growing up.  Of course she’d have a crush on the first human guy she meets upon returning to Narnia.

At least that’s what director Andrew Adamson thinks:  “The kids are growing up. If you look at Ben [Barnes, who played Caspian] and you look at Anna [Popplewell, who played Susan], it seems really implausible that they wouldn’t have some feelings for each other.”  Right?  I mean, you have a teenage girl and a teenage boy, and they’re both pretty attractive by Hollywood standards, so how could they not have the hots for each other?

Yeah, so full disclosure – 2008!Neri did have a mini-crush on Barnes as Prince Caspian.  And I did think his romance with Susan was sweet.  But was it really as inevitable as Adamson believes?  Would it really seem that unnatural for the two teens to just see each other as friends (as they do in the book)?

I’m all for believable characterization – even fantasy needs some tie to reality, to help the reader/viewer connect to the story.  It’s hard to feel really immersed if the author keeps inadvertently reminding you that this is just fiction.

But.  Is a YA female with a boy toy really more relatable than one without?

There are, I’m sure, plenty of readers/viewers who fall into the latter category, and who’d appreciate their own experiences being represented.  In fact, despite what we’re told by TV, movies, ads, and all those books with teen-and-older characters, there are even adults who feel little to no desire at all for a sexual or romantic relationship.  And they’re not simply choosing to be celibate, any more than sexual people choose who they feel attracted to.  Check out Asexuality.org if you’re interested in learning more.

The point (are you listening, Mr. Adamson?) is that of course it’s plausible for two characters – regardless of age or appearance or anything else – to not be attracted to each another.  “Growing up” doesn’t have to mean suddenly wanting to boink.  And as for relatability, if a character is written well enough – fully fleshed out, with clear motives and consistent behavior (but not stagnant, unless the point is to show the character’s inability to change) – any reader should be able to find something to relate to.  Remember that song from Sesame Street, about the things we all have in common despite our differences?

Now, I’m not saying characters without love interests have to be asexual.  I’d just like to see more stories that don’t rely on the romance trope to make their kick-ass females more relatable.  I’d like to see more stories that show how women can be awesome without boyfriends.  Stories in which the challenges don’t involve choosing between two guys, or falling for the forbidden guy, or hoping the super-popular guy will notice you over all those prettier/more popular girls.

Happily, there has been some progress.  The fact that Disney, the royal entity of romantic happily-ever-afters, created a princess who…

[SPOILER ahead for the end of Brave] 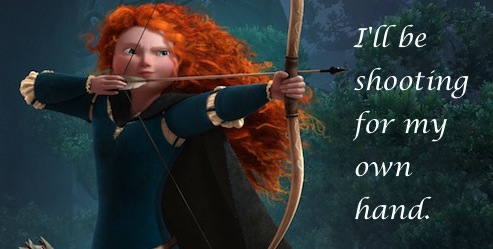 …remains joyfully single at the end is a huge step.  Merida – the first Disney princess without a supporting prince, or even a male traveling companion (if you don’t count her horse, Angus).  And there are some contemporary YA’s that focus on non-romantic conflicts.  Like Katya’s World, by Jonathan L. Howard.  Sj first introduced me to that one, pointing out in particular its lack of romance.  The fifteen-year-old protagonist, Katya Kuriakova, does interact with at least one guy close-ish to her age, but even when he stops being an obnoxious idiot, the most she feels for him is some sympathy.  The story is full enough of twists and thrills and drama without adding romance to the mix.

More of that, please!

What about you guys? Are you as tired of seeing young heroines’ stories centered around relationships as I am? Do you have any good recommendations for YA stories that don’t follow the same ol’ girl-meets-boy patterns? Leave ‘em in the comments below!

*  The accuracy of this statement has not been confirmed.

**  The phrase “token romances” and its application to Prince Caspian were inspired by episode 125 of Rebecca Morse’s web-comic series, “Girls Next Door.”  Heh, no, not that Girls Next Door…

Specifically, see the two speech bubbles at the very bottom of the comic.

Leave a Reply to Video chat: Is YA actually better at feminism than adult lit? | Postcards from La-La Land Cancel reply