Coville emphasizes the concept of storytelling like woah in these books.  Stories have played a huge role in Luster’s history – including in the creation of its greatest threat.

A lie grows into a legend…a legend leads to tragedy…and that tragedy sparks centuries of unicorn-killing.  But legends, memories, and bits of history also help Cara and the unicorns fight back.  The main goal of Dark Whispers, for instance, is for Cara to recover a stolen tale that has crucial information about the enemy.

Heck, just count how many times the word “story” is used throughout the series.

He paused, then said, “Also, I think something happened between the Dimblethum and the Queen.  Unfortunately, I’ve never been able to get that story.” [2]

Grimwold didn’t look surprised.  “I knew there was a tale in all this,” he said.  “Well, come along.  We had best get on to the Story Room.  I’m going to have to make notes.  From the sound of it, I’m going to be part of this one, at least in a small way.  Earth and sky, but I hate it when that happens.” [3]

The Queen looked away for a moment.  When she looked back, her eyes were deep and strange and faraway looking.  “I need to tell you a story.  It is not one I am particularly eager to tell, for it does me little credit.  But it is time it was known.” [4]

The circles of flame indicated that Graumag was shaking her head no.  “Oh, I confess that I did consider her wicked for a while […] But that was before I understood her part of the story.” [5]

Notice the meta in quotes two and four?  As soon as Grimwold makes his statement, he becomes part of a three-layered story: the “tale” of Cara’s experiences, the Chronicles in which he’ll record that tale, and the Chronicles – the four-book story through which the previous two were already created.

It gets even better – if storytelling is a major theme of the series, fairy tales are the sub-theme.  During her first moments in Luster, Cara wonders if it’s going to be like the worlds she once read about in the Lang fairy books;  “she wondered if she would find an old woman here in the woods.  If so, would she be a cruel witch, or a magical helper?” [6]

And during her journeys through Luster, Cara hears many more stories – true stories, according to the tellers, but still folklore-esque.  Graumag’s pre-Luster experiences were retold through the centuries in her original world, until they were known only as a fairy tale (and here we get some commentary on how fairy tales are born and transformed, sometimes even cropped – perhaps because the storyteller/s forgot parts, or because they wanted to emphasize some events/ideas over others, or even because they didn’t like certain parts).

Other fairy/folktale-esque stories include the tale of the Wanderer, and the story of the person who can live forever by binding his life inside a magic egg (kind of like Davy Jones’ chest, I just realized).  And then, of course, there is the story “from which springs all other stories” [7] – the story at the base of the Chronicles.  “The Legend of the Hunt.”

Well, I think it’s cool (some random things I like): 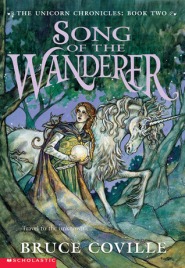 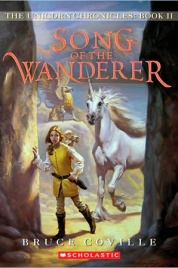 The unicorn on the Book I reprint looks too much like a real horse, rather than the “somewhat smaller and more  finely built” creature Cara meets her first day in Luster.  Now, on that note, I will give credit to the artist for Book II — that unicorn looks more otherworldly, with a hint of something spooky in those dark, expressionless eyes.   But the overall tone of both reprint covers is too dry; they don’t have that mystical feel of the originals.  Nay, my heart belongs to the dark cave; the misty, starlit forest; the rougher, curly-maned unicorn.

This sentence from Book III is so simple, but the image fits so perfectly with the weary, low-spirited mood at that point in the story.  On the other hand, it also gives both the reader and the characters a moment of relief from the constant tension of the previous scenes.

As beautiful and amazing as the series is, it does have a few not-so-amazing spots.  Three, in particular, from Dark Whispers and The Last Hunt.

… [Proper Noun], [Proper Noun], and [Proper Noun] watched with mingled hope and horror.  The hope was because it seemed the [plural noun] might actually succeed in [verb]  …  The horror came as they saw [horrifying sight]. [9]

See, Captain, it’s just that we’ve already seen what the three watchers are watching, so…well, we kind of already know why they’d feel hopeful and horrified.

Now back to the praise-heaping:

In the end, Bruce Coville is amazing and all of the wonderful things about the unicorn quartet — the world-building; the theme of stories (with the sub-theme of fairy-tales); the complex but well-organized plot; and the way he makes so many points of view (in Books III and IV) speak in a single, coherent voice — most definitely make up for the few annoying things.

If you’re interested, there are a few companion stories to the Unicorn Chronicles on the quartet’s official website.

* Romantic in the 19th-century literary sense.

** I may or may not mean “torch” in the British sense (i.e. flashlight).  As long as moths think it’s sexy, either works.