Yes, ok, all right, I know it’s not the most original thing.  I’m not the first, second, or even 33,333rd person to go to DisneyWorld.  But it was my first time, and it was a Juv/YA lit-and-folklore/fairytale-related experience, so by gosh, I will record it!

Being the dedicated blogger on Juv/YA stuff and folklore/fairytale-related things that I am, I had some goals going into this family vacation.  There were two characters, above all others, with whom I was determined to have my picture taken:  Ariel (obviously) and Belle (loves books, especially fantasy, especially fairy tales).

Now, I wasn’t going about this as just another tourist getting a character meet-n-greet photo.  In my head, at least, I had a role picked out for myself in relation to Belle and Ariel, respectively, and a sort of vague storyline about how we knew each other (some of which I actually just came up with while writing this post).  Again, none of this would be apparent to anyone else — to anyone watching, I was just a random tourist who happened to be wearing a blue dress, with her dark brown hair in a pony tail, carrying both a traditional book and a kindle. . .

We’ll begin non-chronologically with Ariel, who you see below with her mermaid friend Neri.  Neri lives in the lake that separates Epcot from the Magic Kingdom, and had just come up for a visit.  That’s why my–I mean Neri’s–hair is wet, you see, and also because it was raining outside.

This grotto was created by King Triton in Erik and Ariel’s castle gardens after the events of TLM2.  Melody had a lot of say in the design, since in addition to being a nostalgic nook for Ariel, it would also serve as a hangout for Melody and her friends.  And, of course, for future grandchildren.

The grotto stuff I came up with just yesterday.

Neri wears a simple land dress, which appears the moment she steps out of the lake (no need to make a PG-13+ spectacle here). 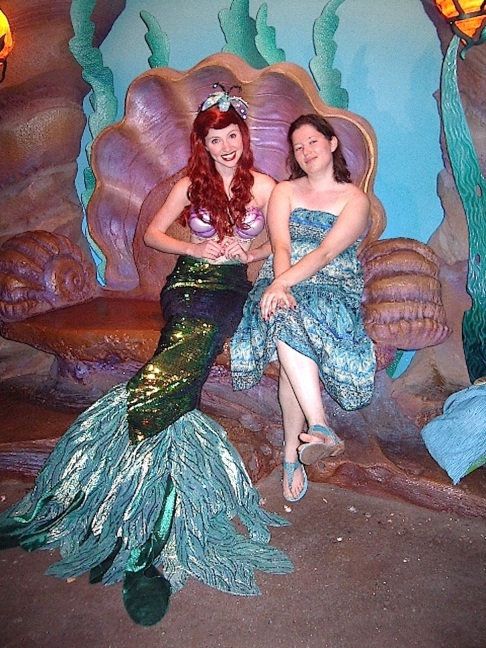 I think Ariel was doing some sort of seaweed wrap that day.  Something to keep her legs/fins healthy after a lot of human-to-mermaid-to-human transformations, maybe?

After catching up with Ariel, Neri decided to explore the Magic Kingdom a bit longer before returning to the lake. 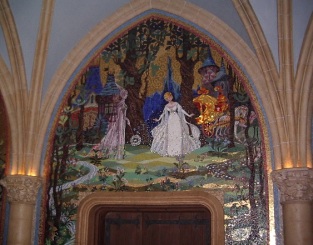 Passing through the tunnel/archway of Cinderella’s castle. 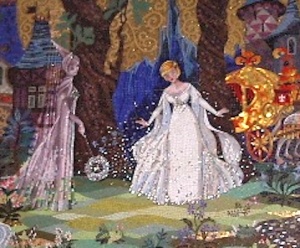 Honoring the local custom of trying to pull a sword out of an anvil.  Apparently you get extra Looking Cool points for doing it singlehanded.

Or maybe I just made that up.  Anyhoo, like most attempters, Neri was unsuccessful.

There’s one prophecy going ’round that some scrawny blond kid will pull the sword and then run off to become king of some other land outside the Disney grounds.  Another rumor says it’ll be a short blond kid dressed all in green, and he’ll disappear to some magical safe realm while we all get seven years of doom and gloom.

Me, I think they should leave the sword stuck and use it as a teaching tool for young knights — watch your aim or you’ll end up like this guy years ago who got his father’s prized sword stuck in a not-yet-fully-cooled anvil one night.  Rather embarrassing for him, of course, losing the duel he was dared into by his rival from knight school, not to mention the trouble he got for stealing his dad’s sword in the first place (didn’t have one of his own yet, another source of mockery from said school nemesis).

Had to be apprenticed to the metalworker as payment for ruining what would’ve been a truly impressive anvil.  And he didn’t even get to go to the next night’s dance at Katy’s place, where he was finally going to ask her out.  She hit it off with that git from knight school instead and their families agreed on a match within the year.

So.  Always watch your aim. 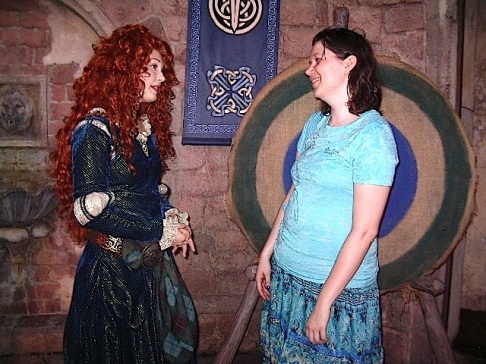 Something tells me she and Ariel could get along well . . .

* in a storytelling sense, not a reflection of the actual sequence of events.

** This writer from The Telegraph talked a bit about the Scottish/European folklore behind Brave, soon after the film’s release.  Note: it’s a bit spoilery, just so’s you know.  Oh, and do keep scrolling after the “Related Articles” box; the article’s not over yet.

Experiencing “Beauty and the Beast”

Our hotel was within walking distance of Epcot and the World Showcase, where some of the characters — Aurora, Mary Poppins, Belle, etc. — also held meet & take photo sessions.  And so, mes chéris, it is with greatest pride and deepest pleasure that I proudly present to you:  a story of book-love and time travel! (again, mostly conceived post-vacation)

The trailer begins with a clip of Belle and her future reincarnation (or descendant) deep in bookish discussion.

You see, Future!Belle, whether she be a reincarnation or descendant, has gone back in time to meet her ancestor/previous incarnation.  And yes, in case you were wondering, I did get that idea from Harry and the Potters.

Meanwhile, Disney!Belle has found that the magic hand mirror shows not only the present, but bits of the future!  Seeing a glimpse of Future!Belle, she somehow is able to go forward in time.  The two Belles meet somewhere in between, in a space that blends the quaint(ly remembered) look of the past with modern shopping and dining options.

Here’s Future!Belle enjoying a chocolate croissant and espresso while contemplating the much more froody vibes she’d gotten from Books 1-4 of the Hitchhiker’s Guide quintet. 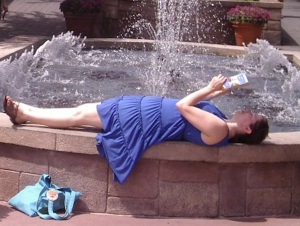 And lest you think Future!Belle reads only digital books– voilà!  The book she’s reading here, and which Disney!Belle was holding two photos up, is Diana Gabaldon’s Voyager — NO SPOILERS PLZ, I HAVEN’T FINISHED IT YET.

You know, I think Disney!Belle would have liked the Outlander series. 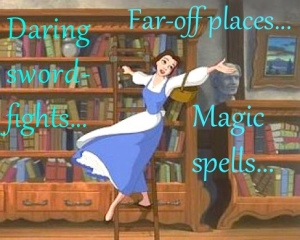 You’ve got your magic portals, your epic battles, your voyages across the sea… though, I wonder, considering that Disney!Belle’s time period may be roughly the same as Jamie’s, what impact would the story have on her vs. on Future!Belle?  Hmm…

Besides Belle and Ariel, I did get in some other character interactions — you saw Mer-me with Merida above, for instance.  And in the English section of the World Showcase, I met a certain cheeky and curious young lady in a delightful gardeny setting.

For the purposes of this character meet, I imagined myself as a Wonderland resident, or perhaps someone else who wandered in by accident and has decided to stay a while (check out the whimsical t-shirt, yo!  A unicorn emerging from a rainbow! — the unicorn’s head is behind the tea cup.  Oh, and that’s a hat I’m holding in my left hand.) 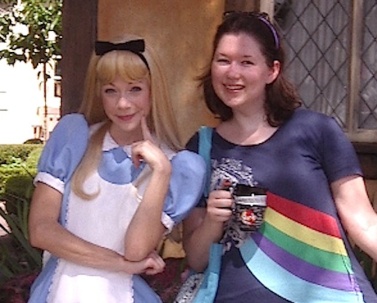 Things were a tad awkward at first;  Alice assumed that the awesome triple-decker tea cup I’d just bought was for her, and I was unwilling to part with such an awesome and whimsical more-likely-to-be-used-for-coffee cup.  Alice sighed, and then moved on to a different topic, and agreed to take some photos before I ventured off into other parts of Wonderland (i.e. behind the house) while she stayed to greet more admirers.

But as I entered the back garden, my mind suddenly switched fictional ‘verses, because — a maze!  What?  It’s… close enough, at least for some photographic geekery . . . 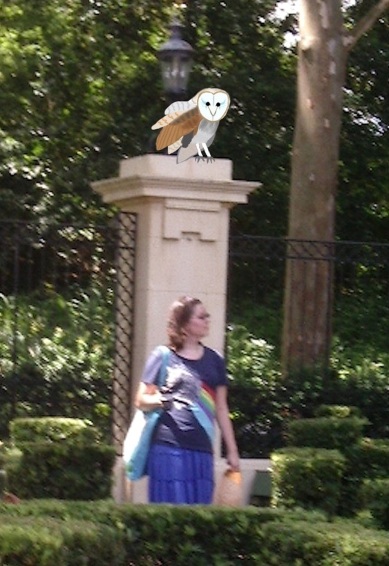