And now for something a bit different!

I may have once or twice mentioned my love for a certain Jim Henson film starring David Bowie and Jennifer Connelly.  Well, last year, when my best friend asked me what I wanted for my birthday, I remembered a book I’d been meaning to get my hands on for ages: 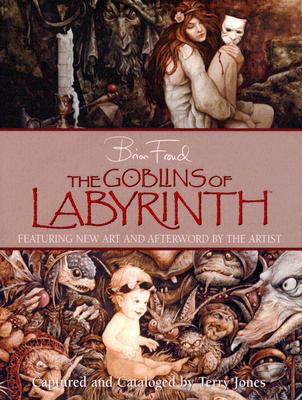 Well, you know how it is when you get an awesome new book and you plan to read it RIGHT NAO (actually, I did read the Afterword right away…for reasons illuminated a few paragraphs down) but then you get sidetracked by other books and projects, and that awesome book you wanted to read earlier waits on your bookshelf until finally you realize, Hey! I have this awesome book I’ve been wanting to read! I’m for real going to read it right now!

Which is what I did these past few days.

Just like his and Alan Lee’s Faeries, The Goblins of Labyrinth is an encyclopedia of various types of fae (more specifically, various types of goblin.  Even more specifically, the variety of goblin born in the early stages of the conception of Labyrinth, which would later inspire the actual muppet goblins that appear in the movie), accompanied by Froud’s sketches and paintings.  The “histories” and commentary are provided by Terry Jones, former Monty Python and screenwriter for Labyrinth. 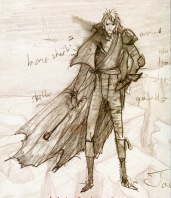 As you’d expect, Jones’ “histories” and commentary are hilarious.  Goblins are a nasty, smelly, vulgar, all-around-gross bunch (sadly, there is no entry for the hot ‘n sparkly Goblin King of more recent Labyrinth-world history…Jones’ Introduction/frame narrative explains that the goblins included in the book lived 60 million years before the invention of glam rock.  But!  The 20th Anniversary edition does include a new Afterword in which Froud talks about Bowie and the development of the Goblin King role.  And there are some of his early sketches of Jareth.  So fellow fangirls need not despair).

One of their favorite foods is a potato-like thing grown “in the warm, wet cracks and crannies under armour.” [1]  They also enjoy a nice owl wine, which is made from “carefully pressed” and “fermented” owls. [2]  Yeah, this is deeeefinitely before the reign of the hot ‘n glittery GK, who happens to frequently shapeshift into a barn owl.

Actually, the goblins in general aren’t all that nasty.  Some intend to do dastardly things, and spend much time plotting and planning the devilish acts of deviousness which they will accomplish someday…  But really, they’re just a – er, amusingly dimwitted lot.

So I’m snickering and nose-wrinkling my way through this goblincyclopedia, when I come to Plate 53:  Böegiböe.  In which Mr. Jones recounts the apparently pointless Tale of Böegiböe, which I will now paraphrase:

Once upon a time, Böegiböe went on a journey, taking only his staff in one hand.  At some point he decided he’d like to have something to fill the hand not holding the staff.  He passed a gypsy, who offered him all sorts of medicinal herbs to fill his unoccupied hand, but Böegiböe said “That’s not good enough for me.”  Then he passed a conjurer, who offered him all sorts of magician-ey props, but Böegiböe declined.  Then he came to a castle by a lake, where a rich lady offered him gems and gold and pearls and such, but that still wasn’t good enough.  Suddenly he heard a cry for help — a goblin named Alger Öt had just been thrown out of the castle and into the moat (there was a previous story about Alger Öt and why he was thrown out of the castle, but anyway–).  Böegiböe hurried to help the drowning goblin, and pulled him out of the moat.  A crowd appeared and gave Alger Öt some good news that you’d only understand if you’d read that previous story, but anyway…  Alger Öt was so delighted that he shook Böegiböe’s hand, “and as he did so, Böegiböe looked down at his hand and said, ‘That’s good enough for me,’ and Böegiböe and Alger Öt became friends for the rest of their lives.” [3]

What?  Ok, maybe I am easily aww’d (and maybe my Annie-Shirley “Aww” reference is getting old ^_^;;), but it is kind of sweet.  And it sounds like an actual fairy tale, with the journey motif and the repetition (the first three characters Böegiböe meets all ask him some variation of “where are you going so purposefully?”; and, of course, the pattern of several unsuccessful events that all happen roughly the same way), and the theme that the things most worth having aren’t necessarily tangible/fancy/expensive/etc…