So… I was wandering through the library the other day, when I saw this: 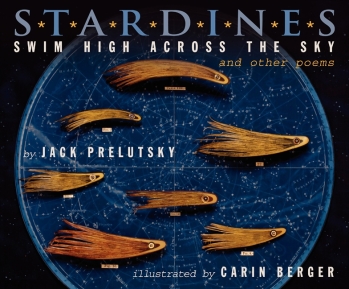 An intriguing title, pretty cover art, and the promise of more poetic surrealness inside – how could I resist these cosmic Clupeids?

It’s too bad I didn’t discover this book back in April; I could’ve totally done a Poetry Month tribute to Jack Prelutsky.  Oh well; what day isn’t a good day for good poetry, eh?

Did you know Prelutsky was the first person to be named Children’s Poet Laureate in the U.S.?  The Poetry Foundation created the title in 2006 to “raise awareness of the genre and encourage more poets to write for children.” [1] The Foundation believes “that children have a natural receptivity to poetry and are its most appreciative audience, especially when poems are written specifically for them.”

I don’t know if I would consider myself as having been naturally inclined toward poetry as a kid—I was generally more interested in prose fiction—but I did love me some Shel Silverstein, and of course there were the Lithuanian children’s verses I grew up with.  And I remember going back again and again to an old Mother Goose book we had at home…though I think that had more to do with the illustrations than the rhymes themselves.

And Prelutsky must have realized that, too – that for children, at least half the enjoyment of a poem is in the accompanying images, whether they’re simple and elegant or silly and surreal.  Especially when the poem talks about things like Alarmadillos or Buffalocusts or the eleven-headed-eleven-legged-eleven-tailed-eleven-eyed-eleven-winged-eleven-beaked Snoober.  Kids want to see what these crazy creatures look like!  This isn’t to say that we shouldn’t encourage children to exercise their own imaginations; after all, there could be dozens of ways besides the illustrator’s to arrange all those heads and tails and wings and beaks onto one body!

And of course every reader has different tastes, and different reasons for enjoying or not enjoying a poem.  Wee Neri, at least, was much more likely to read a book of poetry on her own if there were interesting visuals included (What? Me? A fan of visuals? Shocking, I know).  Half the fun of a Shel Silverstein book was his crazy drawings—they didn’t just accompany the text, but worked with it.  Like when they acted as the punchline of a joke.

The poems and drawings in Prelutsky’s big collections—so far I’ve read My Dog May Be a Genius and I’ve Lost My Hippopotamus—in fact reminded me a bit of Silverstein.

Going back (or forward, chronology-wise) to STARDINES… this is one of his most elaborately and creatively designed books yet.  The poems are presented like entries in someone’s field notes, with typewriter-style text and pins stuck in the corners, graph-paper backgrounds, and helpful pronunciation notes (ok, I know he includes those with every scrambled-animal poem, but here it seemed even more fitting).

And the images of the documented creatures?

The miniature dioramas in this book are assemblages created using a combination of cut paper, found ephemera, vintage engravings (which were scanned, manipulated in PhotoShop, and then printed out), beeswax, wire, thread, and wood.  Once each piece was made, it was photographed digitally to prepare the full-color art. [2]

Now, as for the text… in the first read-through, I don’t know if it was just my mood at the time, and/or maybe it was too late at night, but many of the poems gave me a negative vibe.  They seemed very head-shakey and/or judgmental about their subjects.

Oh, there were positive-toned poems, too, like the ones about STARDINES and FOUNTAIN LIONS, and of course the JOLLYFISH: 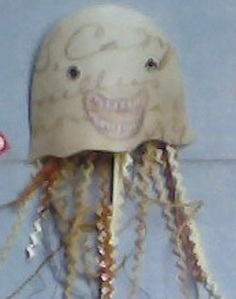 Ebullient blobs of mirth,
With merry dispositions
From the moment of their birth. [3]

[side note:  Warning:  when reading a Prelutsky poem, you may experience an increase in your vocabulary.  Children who read Prelutsky poems may show signs of curiosity, particularly about word definitions, so be ready for questions like “What does ‘ebullient’ mean?”]

[side note 2:  it means “characterized by ebullience : having or showing liveliness and enthusiasm.”  Thank you Merriam-Webster.com 😉 )

And there were neutral-toned entries that described their subjects with no judgment one way or the other.

But then there were poems like “BARDVARKS” (which, incidentally, is the last poem in the book, so we get to end on a frowny note) and “MAGPIPES” —

BARDVARKS think they’re poets
And persist in writing rhyme.
Their words are uninspired
And a total waste of time. … [4]

Nothing but a MAGPIPE
Likes the sounds a MAGPIPE makes.
At best you can describe them
As unmusical mistakes.
Don’t listen to a MAGPIPE
If you have another choice.
Consider yourself lucky
If you never hear its voice. [5]

In all, about half of the poems in the collection had that negative tone.

Am I over-analyzing?  Am I taking poems that are meant to be funny and silly too seriously?  Maybe… so I decided to explore some of Prelutsky’s other collections (in daylight and in a good mood to begin with) – especially the ones with more of his mix-and-match creatures.

And whaddyaknow, I did enjoy them!  I can definitely see younger readers getting a kick out of the tone-deaf TRUMPETOOS and TUBABOONS, or the helpful but hazardous SHOEHORNETS, in Behold the Bold Umbrellaphant.  And it seemed like this collection from 2006 had more cheerful things to say about its franken-creatures, overall.  But of course I can also now see the appeal of poems like CHORMORANTS, from STARDINES; how many kids love doing chores?  Right?  So it makes sense that Prelutsky would write a poem that pokes fun at a creature that only likes doing chores.

Back to Umbrellaphant, which ends on an unexpectedly moving and dreamy note with its ode to “The Solitary Spatuloon” —

At home within a blue lagoon,

The solitary SPATULOON
Calls longingly as it glides by—
“Syrup!” is its plaintive cry. … [6]

I could imagine this being read by an Alice in Wonderland character, in an entirely serious and dreamy tone, so that you’re really not sure whether to laugh or sigh.

We watch with wonder and delight,
Until it vanishes from sight.
Yet, even as it disappears,
Faint strains of “Syrup!” fill our ears.
We wait, and as we wait we yearn,
In hopes the bird will soon return. …

Prelutsky’s larger collections, as I said, have a Silverstein-like style of humor—with an added emphasis on wordplay. 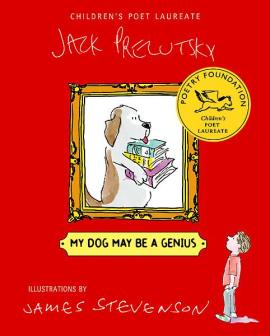 some chickens love jumping,
and some love to swim in the ocean.
These chickens possess
a remarkable trait—
each one is pure poultry in motion. [7]

And then, again, there’s that one poem that surprises me with its profoundness:

I’m appearing out of nowhere,
I’m beginning to exist.
I had never been an inkling,
not a whisper in the mist.
I’ve been absolutely nothing
for as long as I recall,
now I’m fast becoming something
where I’d never been at all. … [8]

The latest big collection, I’ve Lost My Hippopotamus, is even better, IMO.  With My Dog May Be a Genius, I was skipping around, sampling a poem here and a few poems there, and then I’d put it down.  Hippopotamus held my attention better; I started with the first few poems, and then read the next few, and any time I considered skipping to a further part of the book, something on the following page would pull me back.  Next thing I knew, I’d finished the whole book in one sitting.

Was it that the poems had a bit more punch to them?  More moments that made me laugh or say “Ohh, I see what you did there”?

My brain is unbelievable
In every last respect,
Which leads to the uncanny,
Ineluctable effect
Of making everything I think
Infallibly correct.
I think of this, I think of that
The moment I awaken,
And I am never, never wrong . . .
This fact cannot be shaken.
I thought I made an error once—
But I was just mistaken. [9]

There are more of those fused animal-things, of course, and then there’s the brief series of animal haiku!  That’s one thing I really like about Prelutsky – he doesn’t just have one style.  He does haiku, riddles, and even invents new nursery rhymes based in a modern America (I never really thought about how much specific place names played a part in the old nursery rhymes—“There was an old woman of Harrow…”; “A little old man of Derby…”; “There dwelt an old woman at Exeter…” ).

What stood out the most, though, about I’ve Lost My Hippopotamus, was this: 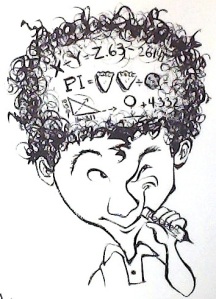 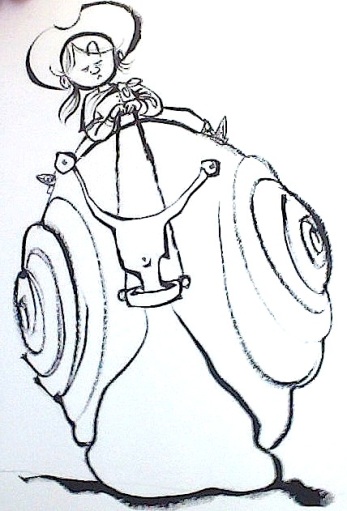 Jackie Urbanovic’s illustrations are bold and big and In-Your-FACE.  I’d turn a page and almost literally say “Woah!”  And any time I thought of skipping ahead, an Afro-wearing iguana or a pair of snarling T-Rexes, or even just a giant splat of glue would lasso me back and say “CHECK OUT THIS POEM!  YOU’LL LIKE THIS POEM!  :-D”

In conclusion…here are a few other Prelutsky books I read, and why I liked them:

Riddles in haiku.
Try to guess which animal
He describes below:

We are we are we

This would be a fun game to play with kids – the parent or teacher reads each haiku out loud, without showing the painting to the listener(s).  Let the kids try to guess which animal is described, and then turn the book around to show the illustration.

Rudy rode a unicorn,
its mane was silver spun,
and west from Nova Scotia
they raced before the sun.
They soared above Toronto,
then north from Winnipeg,
they swooped into the Yukon
and found a golden egg. [11] 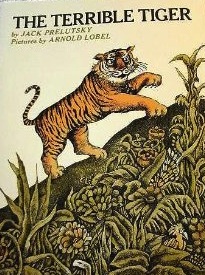 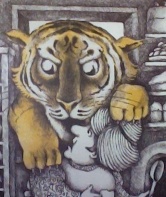 P.S.  If interested in buying any of the books discussed above, you may click on the cover for its Amazon page.  I get a small % of the cost if you purchase that way.