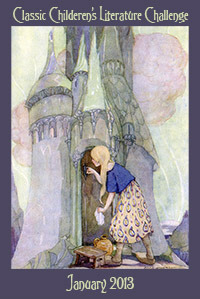 For the Classic Children’s Literature challenge in January, I read Lewis Carroll’s Alice in Wonderland and L. Frank Baum’s The Wonderful Wizard of Oz (totally original, I know, but this is as good a time as any to catch up on the major classics).  And then I decided to compare them with Catherynne Valente’s The Girl Who Circumnavigated Fairyland in a Ship of Her Own Making.

Also, inspired by Jean from Howling Frog Books, I’ll do a follow-up post on some of the less-well-known stories I grew up with.  Stay tuned for flying pigs and enchanted snakes! 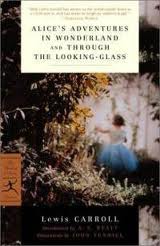 The scenes move from one to the next as they would in a dream – you switch from one surreal situation to the next, maybe without even realizing it.  You might be searching for your college Muggle Studies classroom (except you’re actually in your old high school and you don’t remember registering for Muggle Studies), and then suddenly you’re in a kayak in the gym, trying to steer around all the basketball players who are in the middle of a game, and then suddenly you’re playing croquet with flamingoes instead of mallets, and your opponent is the Queen of Hearts, who keeps screaming “Off with your head!”

As for Looking Glass, it flows just like a game of make-believe.  There may be an overall goal at first (get to that Eighth Square), but on the way you keep throwing in random obstacles and new characters to keep the game going however long you like.

“And how many hours a day did you do lessons?” said Alice, in a hurry to change the subject.

“Ten hours the first day,” said the Mock Turtle: “nine the next, and so on.”

“What a curious plan!” exclaimed Alice.

“That’s the reason they’re called lessons,” the Gryphon remarked: “because they lessen from day to day.” [1] 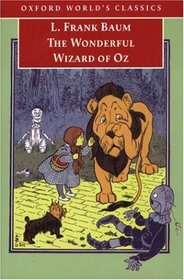 “Tell me something about yourself, and the country you came from,” said the Scarecrow, when she had finished her dinner.  So she told him all about Kansas, and how gray everything was there, and how the cyclone had carried her to this queer land of Oz.  The Scarecrow listened carefully, and said,

“I cannot understand why you should wish to leave this beautiful country and go back to the dry, gray place you call Kansas.”

“That is because you have no brains,” answered the girl.  “No matter how dreary and gray our homes are, we people of flesh and blood would rather live there than in any other country, be it ever so beautiful.  There is no place like home.” [2]

Is Baum using Dorothy as a mouthpiece for what he considers proper American values?  Is he encouraging his child readers to stick to their lot in life, and not be tempted by the beauty and excitement of other places?  Maybe Dorothy’s stay in Oz is just a break, after which she can drudge on with renewed energy.

Or is Baum being ironic here, as he is in his portrayals of the Scarecrow, Tin Man, and Lion?  The story does have a theme re: people’s tendency to believe whatever an authority tells them vs. looking at the world with their own eyes.  Maybe Dorothy’s statement is supposed to seem ridiculous – i.e. see, children, how excessively attached people are to their lot, and how suspicious of any offer to improve their lives?  From this perspective, maybe Dorothy’s stay in Oz is meant to show her what life could/should be like, and she’s meant to bring some of that color and excitement back to Kansas, and teach Auntie Em how to laugh again. 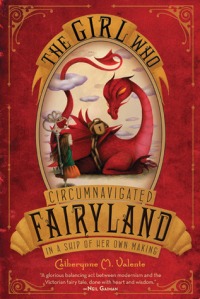 How it’s like Alice in Wonderland/Through the Looking Glass:

How it’s like The Wizard of Oz (the book):

How it’s like The Wizard of Oz (the movie):

“Obviously, the eating or drinking of Fairy foodstuffs constitutes a binding contract to return at least once a year in accordance with seasonal myth cycles.” [3]

And all the other meta-ness, and the funny ways Valente incorporates myth and fairy tale elements.  Like the Persephone Clause, and the idea that changelings are really just part of a “cultural-exchange program.”

“Marids . . . are not like others.  Our lives are deep, like the sea.  We flow in all directions.  Everything happens at once, all on top of each other, from the seafloor to the surface.  My mother knew it was time to marry because her children had begun to appear, wandering about, grinning at the moon…”

“…It’s like a current: we have to go where we’re going.  There are a great number of us, since we are all forever growing up together and already grown.  As many as sparkles in the sea…” [4] 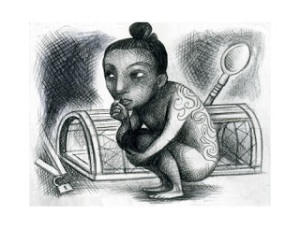 But even when he’s free, Saturday acts subservient and insecure – heaven forbid he upstage September by being too strong and self-confident.  In fact, he discourages her from freeing him in the first place, insisting he belongs to the person who caged him.

And the rest of his people, too, are servants to this light-skinned tyrant.  And to top it all off, by nature, they can’t even use their own magic unless someone physically subdues them (“I can only grant wishes if I am defeated in battle; if I am hurt nearly to death” [5] ). 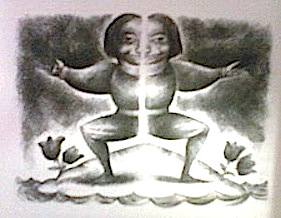 “…before the Marquess came, we just lay about on beaches and ate mangoes and drank coconut milk and knew nothing about industry whatever!  How gladsome we are, now that she has shown us our laziness!  Now we know the satisfaction of a full day’s labor, of punchcards and taxable income.” [6]

Of course, September suspects that the Marquess made the Nasnas think that way about themselves – but that makes them seem even more weak.  It’s true that all of Fairyland is being repressed, but there are (at least passive aggressively) defiant characters besides September, who don’t just believe whatever the Marquess tells them.  Why, then, are the Nasnas so easy to demoralize?

Oh, book.  You were doing so well!

So, how do I feel about the story overall?

It is a very enjoyable, very clever story overall.  I love the meta-ness and the twists on fairy tale concepts.  And I love the final sentence, as random as that sounds; there’s just something about really effective chapter and story endings, you know?

[3] Catherynne M. Valente.  The Girl Who Circumnavigated Fairyland in a Ship of Her Own Making.  New York: Feiwel and Friends, 2011.  Pg 4.