This is the sequel to Marillier’s Wildwood Dancing, set six years later and focused — seemingly — on much more this-worldly intrigues.  Paula, the second-youngest of the five dancing sisters, is invited to join her father on a merchant voyage from Transylvania to Istanbul, where Teodor hopes to procure an ancient pagan artifact — Cybele’s Gift.  The item is said to contain the last words of the Anatolian earth goddess before she left the human world.

Naturally, Teodor is one of many people hunting this treasure, but neither he, nor Paula, yet realize how dangerous the hunt will be.  Besides the merchants, there are religious authorities that see the pagan symbol (and those who seek it) as a threat.  And then there are the forces of the Other Kingdom, unseen or heard by Paula for six years, now suddenly concerned for their own reasons in the matter.

Wildwood Dancing is one of my favorite fantasy novels.  It’s one of those stories I knew after the 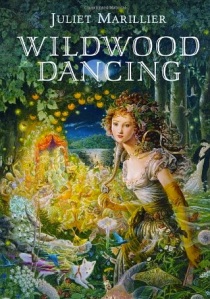 first few sentences was going to be wonderful –

I’ve heard it said that girls can’t keep secrets.  That’s wrong: we’ve proved it.  We’d kept ours for years and years, ever since we came to live at Piscul Dracului and stumbled on the way into the Other Kingdom.

Notice that defiant yet encouraging tone.  You’re not simply watching the first scene open; the narrator is leading you in herself, suggesting she’s chosen to trust you with this secret.

And the rest of the story follows through beautifully.  The pacing, the structure, the narrative voice, and oh of course the blending of various Eastern European fairy- and folktales…

Cybele’s Secret was more of a mixed experience.  Its predecessor was brimming with magic, much of the action set in the Other Kingdom.  The first 3/4 of the sequel focuses on the human world, on human sociopolitical intrigues, which feel kind of mundane in comparison.  Especially when the story falls into been-there-read-that territory, attempting to dazzle me with its dashing pirate antagonist, its buff-and-tough-yet-sensitive protector, lots of snarky/flirtatious banter, and…ugh…a love triangle.

“There were patterns here far larger and older than our minds could encompass.  Wisdom, a deeper form of wisdom than any scholarship could unlock.” [1]

Regional earth goddess folklore, and any scenes involving the Other Kingdom = 😀

To fans of Wildwood Dancing, I’d say you can take it or leave it.  As a sequel, it’s ok, but I don’t feel like it’s added anything vital to my understanding of the world created in the previous story.  On its own, Cybele’s Secret has very compelling moments that could have worked even better without the trope-y moments.