For the Harry Potter Readalong…

… I re-read Sorcerer’s Stone and Deathly Hallows, and read the following Harry-relevant books: 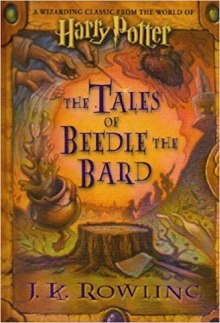 for the entire Harry Potter series.  Proceed at your own risk.

PART ONE:  In which I somewhat-ramblingly reminisce.

My first Harry Potter book was an eighth-grade graduation gift, back in ‘99.  My younger cousin, whose family was visiting for the occasion, perked up when she saw what I’d gotten, saying her fifth-grade teacher had read Harry Potter and the Sorcerer’s Stone to the class that year, and that it was really good.

I was at first a bit disappointed that the hero wasn’t a girl, but of course Harry very much endeared himself to me by the end of Chapter 2 (though I was, of course, pleasantly surprised when I learned that J. K. stood for Joanne Kathleen).

Flash ahead to the following summer, when I was very tempted to buy Goblet of Fire at an airport bookshop, going to and coming back from a Lithuanian summer camp in Vermont, where I’d watched enviously as another camper read her copy by the pond while the rest of us sunbathed or braved the phosphorescent orange-brown water.  But my mom wisely noted that it would be less expensive at a non-airport bookstore, and in retrospect I’m glad I supported the local children’s bookshop where I’d also bought Prisoner of Azkaban.

In between books, I submitted cheesy fanfics to Harry Potter’s Realm of Wizardry and FanFiction.net.  I read many stories, too, but must’ve missed the now-famous Draco trilogy, which became Cassandra Clare’s Mortal Instruments series.

And I pored through the post-Half-Blood Prince theories on the site formerly known as Dumbledoreisnotdead.com – my favorite was the nonverbal spell theory (i.e. that Snape said “Avada Kedavra” but thought a different spell, and thereby helped Dumbledore fake his death).

It was a glorious eight years. 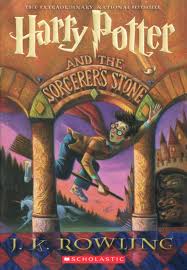 Ah, that innocent first year at Hogwarts, when Harry was just discovering chocolate frogs and wizard chess and broomstick-soccer Quidditch…

…when Hermione first changed from that bossy, stalker-ish know-it-all who kept harshing on Harry and Ron’s fun, to their still-bossy but loyal and more rule-flexible best friend.  Poor Hermione…yeah, she was kind of obnoxious before the troll incident, but I think she was just a) lonely and b) desperate to prove herself just as capable as all these kids who’d grown up knowing about magic.  Hence, her show-off-yness and constant talk about how much she’s studied.

…when the mood after Harry got through his end-of-the-year Voldemort encounter was much more cheerful, and not bittersweet like the endings of Goblet through Hallows.

Back then, Rowling’s created world was a mostly safe place, an escape from real life.  Yes, bad things happened to good people like Harry’s parents, but that was in the past; in Harry’s present-day experience, the villain was defeated and all our favorite characters were still alive at the end.

And back then, the good-guys and bad-guys were more clear-cut.  Even Snape.  His meanness was explained away as injured pride at having been saved by Harry’s dad.  And James Potter, of course, was still a shining figure, a spotless hero and role model for Harry.  We didn’t yet know he’d been “an arrogant toerag” [1] as a teen, and that Lily had once hated him

Side note:  It’s eerily telling that, while discussing the different Houses on the way to his first term at Hogwarts, James echoes Draco Malfoy’s words from Sorcerer’s Stone:

Nope, until Book Five, Lily and James were the poster couple, the nicest and best wizards that everyone was proud to know and devastated to lose.

Book Four was the grim turning point.  After that, Rowling was as good as her word in making Voldemort and his followers more-than-cardboard villains.  Belatrix Lestrange once tortured Neville Longbottom’s parents, and happily tortures Hermione for information.  Fenrir Greyback brutally murders a five-year-old boy.  Voldemort murders a Hogwarts teacher and then pleasantly calls his pet snake to dinner.

And in Deathly Hallows, there are strong parallels between the Death Eaters – as well as wizards like Grindelwald – and the Nazi regime.  The Muggle-born Registration Commission.  The old symbol that was once innocuous, but now has ugly connotations.

There are other real-life, real-history elements, too, in the latter half of the series – the centuries-old mistrust between wizards and goblins (on a random lighter note, I LOVE that the goblins’ language is called “Gobbledegook”).  The use of house elves as slaves.

Speaking of which, is anyone else a smidge troubled that Harry’s last thought in Hallows, just before the Epilogue, is whether Kreacher could bring him a sandwich? Is it so ingrained in him to think of house elves as servants, even though he’s only known about them for a few years, and even though he was the one who freed Dobby and treated him with a respect that surprised and impressed the goblin Griphook?  I guess he feels differently about the house elf he “inherited” from his godfather?

As ravenously as I’d powered through Deathly Hallows five years ago, and even having watched the final two movies (and enjoyed them much more than the previous ones), I had a harder time getting through it on my second read-through.

I had to stop for a while after Harry’s fight with Lupin in Grimmauld Place.  I hated seeing Harry’s cruel words, even though I could understand where his rage was coming from, and even though it did have the desired effect of convincing Lupin to go back to Tonks and their soon-to-be-born child.

And by the end, although we get our expected final, unequivocal defeat of Voldemort and the Death Eaters, and though the Epilogue ends on a peaceful note, there’s still that very bittersweet mood.  George has to spend the rest of his life without his best friend and other half (though I’m more than willing to accept this as headcanon).  Teddy Lupin has to grow up, like Harry, without his parents.

“Oh, it would be lovely if they got married!” whispered Lily ecstatically.  “Teddy would really be part of the family then!”

“He already comes round for dinner about four times a week,” said Harry  “Why don’t we just invite him to live with us and have done with it?” [4]

… Now, what exactly did Harry say in GoF that made Dumbledore’s eyes shine triumphantly?  Ding ding ding!  It was the part about Voldemort taking some of Harry’s blood!  Until that moment, Dumbledore thought the only way to kill Voldemort was for Harry to die, but when Harry mentioned the blood, Dumbledore realized there was a loophole – that he could have his cauldron cake and eat it, too!

But like Harry, by the end of Hallows, we finally get to see the man as a human being whom we have a right to question, and even sometimes disobey (there’s that moment in the Room of Requirement, when Harry decides to confide in more people about his mission).

And then a silver hare, a boar, and a fox soared past Harry, Ron, and Hermione’s heads:  The dementors fell back before the creatures’ approach.  Three more people had arrived out of the darkness to stand beside them, their wands outstretched, continuing to cast their Patronuses: Luna, Ernie, and Seamus.

“That’s right,” said Luna encouragingly, as if they were back in the Room of Requirement and this was simply spell practice for the D.A.  “That’s right, Harry . . . come on, think of something happy. . . .”

“Something happy?” he said, his voice cracked.