WARNING:  This post contains significant levels of nostalgic melodrama, tempered somewhat with retrospective sarcasm.  Also, possible spoilers for any of the books mentioned ( Edit 5/11/20: the hover text feature seems to have disappeared, so I transferred the snarky summaries to the end of the post).

Ah, Sweet Valley.  It’s more than just a town; it’s a state of mind.  A mind filled with drama, and romance, and lots of soapy teenage drama.  Perhaps I felt some affinity with this world because, I, myself, lived in Southern California when I read my first Sweet Valley book. 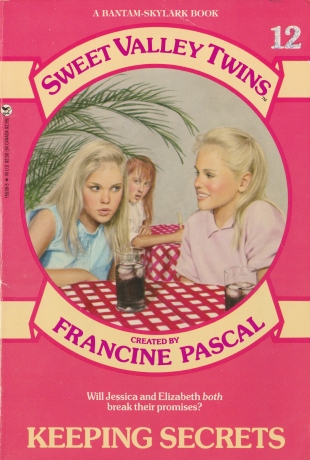 I could easily imagine that balmy, sun-drenched atmosphere.  And perhaps I continued reading them as a way to connect with my beloved Golden State when my family moved east.

There was also, of course, that fascinating blond-haired-blue-green-eyed duo around which all the drama orbited.  How cool it must be to have an identical twin! thought seven-year-old Neri.  It’s like having a permanent best friend!  It must be such a magical bond full of super-best-friendship and adventure!

I wrote my first fanfic about Jessica and Elizabeth.  They were flying somewhere on separate planes (oh no, the twins have to be apart!) and then one of the planes started having trouble, and there was a dramatic rescue sequence in which the two planes were somehow connected mid-air, so the passengers from one plane could transfer into the other plane, and the twins were so very relieved to be together again.  I was eight or nine.

The first fan-website I ever visited was for Sweet Valley. 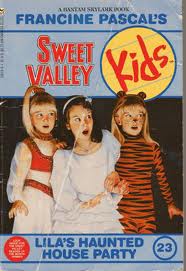 Now, for all this talk of teenage drama, I was actually much more interested in the spinoff series, Sweet Valley Kids, which follows seven-year-old Jessica and Elizabeth through their second-grade adventures.

Well into sixth grade, I was still (maybe somewhat embarrassedly) reading those “little kid books.”  I don’t know, there was something more endearing about the twins as second graders.  Their adventures were less about dating and popularity contests, and

more about tea sets and slumber parties and proving you did, too, see a mermaid during the beach field trip.

Oh, of course I was SO EXCITED when the SVHigh TV series came out and I watched a couple episodes, all the while hoping they’d make an SVKids show someday.  Well, at least there was a flashback scene in one of the SVH episodes to the twins as 6- or 7-year-olds, when Elizabeth wanted to play that Operation board game, which she’d just gotten for Christmas, but Jessica wanted to go to Lila’s to play with Lila’s new dollhouse, and Elizabeth was sad.  Good times.

Maybe my love of the Kids series was nostalgia for my own seven-year-old days – that age when it seemed so much easier to make friends; when your classmates weren’t so

b!tchy, and you didn’t have to worry as much about whether your clothes were cool enough, and people didn’t say you were too old to still be into mermaids and unicorns.

And interestingly enough, Elizabeth and Jessica seemed a smidge more rounded as characters in the Kids series.  Their personalities aren’t as one-dimensionally different as in the Twins series, where Elizabeth is the saintly, responsible, altruistic angel and Jessica is the self-centered, social-climbing, boy-crazy Mean Girl.

Their best-friendship more believable in Kids than in Twins or High, where it seems like Jessica just wants Elizabeth to do stuff for her, and Elizabeth is just so nice that she can’t stay mad at Jessica.  That’s my impression, anyway, from the few books I’ve read to re-familiarize myself with this world.

Reviews of said books can be found  at Same Story (here and here).  There are spoilers.

Oh hey, and congrats to sj and Meg on your 200th post!  I’m doing a Kermit arm-flail + yaaaaaaaay! right now.

P.S.  Apparently, Francine Pascal originally wanted to create a teen soap opera, but someone suggested she make a book series instead.  Who’d’ve guessed?

SVT #12: Keeping Secrets — OMG, Jessica and Elizabeth’s dad tells them about this secret made-up language he knew as a kid, and now the Unicorn Club is all mad ’cause Jessica won’t tell them her family’s private business, and Lila Fowler decides to throw a huge party and not invite Jessica unless she tells the secret. Oh noes!

SVH Senior Year: Sweet 18 — Elizabeth gets accepted to Oxford, but Jessica throws a fit because, like, why would Lizzie go to college so far away!? So Elizabeth decides to go to Sweet Valley U with Jessica.  Sweet Valley: you can check out anytime you like, but you can NEVER LEAVE.

SVK #23:  That time Lila had a haunted house party.

SVK #59:  That time a new girl came to school, and her name was also Jessica, and she turned out to be kind of a b*tch.  Whaaaat?

SVK Super Snooper #7:  The Case of the Alien Princess — That time the twins & friends got abducted by aliens and averted an interplanetary war.  Or something.

SVH #85: Soap Star — It’s totally not creepy for a 22-year-old soap star to invite a 16-year-old to those fancy Hollywood parties, and I can totally see why Jess’s parents would let him drive her home alone. He’s an actor, so he must be ok.