This book was originally published in Germany in 2001*, under the title Die Fließende Königin (The Flowing Queen).  In this review, I refer to the Lithuanian and U.S. translations: 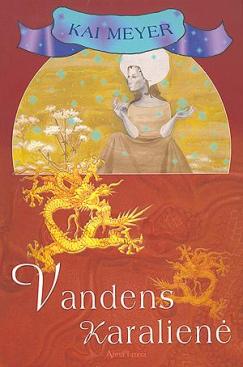 (Why are there dragons on the Lithuanian cover?  There are no dragons in the story.  I guess they’re meant to symbolize all the fantastic creatures, or they just look cool?)

Ok, borrowing the IB rating scale (it’s really funniest when they use it):  3 out of 5 National Geographic expeditions that show Hell is a real, physical place.

I finally finished my bilingual expedition through Kai Meyer’s Vandens Karalienė /The Water Mirror.  It began back in 2009 when my brother, cousins, and I were in Lithuania for the millennium celebration.  While wandering through a bookstore in Vilnius, I saw this book.  It was about mermaids, and something about flying lions but who cares there are mermaids!

Of course, the random powers of distraction made me set it aside when I returned home, and I didn’t actually start reading it until a few months ago.  I got 3/4 of the way through, wrote some first impressions in a Livejournal post, and set the book aside again.

Flash forward to a few weeks ago, when I picked up the U.S. edition, The Water Mirror, at my local library.  Forward again to last night, when I cruised through 3/4 of that version – both to remind myself of what’s happened so far, and to clarify things I had trouble understanding in the Lithuanian text (hence, my self-imposed challenge to read more texts in Lithuanian).  For example, I realized that in this alternate universe, it’s not that the Egyptian pharaohs had existed all the way from the age of Ancient Egypt to the present (sometime in the late 1800s).  Instead, one of the old pharaohs was somehow re-incarnated in the mid-19th century, after which he spread his empire throughout the world.

Tl;dr  I finished both versions today.

For the most part, as I was re-reading the book in English, the multiple plot threads (the mermaids, the history of the stone lions, the messengers from Hell…) made more sense being thrown into the same story.  The overall plot felt less cluttered.

Oh, except for that major, overarching conflict.  I’m sorry, but the concept of mummy armies doesn’t sound terrifying.  It sounds goofy.  All I can think of is an army of Scooby Doo-style cartoon mummies trudging with their arms outstretched, groaning spooookily as the heroes’ legs become a wheel-shaped blur before they actually start running.

And then I find myself groaning, thinking, Is this going to be another zombie-apocalypse story?  The short, non-spoilery answer:  yep.

Now, here are the elements I liked:

If only I felt more invested in that main conflict.  If only I hadn’t gotten progressively more annoyed by Merle’s snippy comebacks — yeah, I get it, she’s a reluctant hero.  If only I wasn’t so creeped out by one character’s – a character with whom we’re supposed to sympathize – entirely serious suggestion that Venice agree to an alliance with Hell.  I’m not particularly religious, (I consider myself at least somewhat agnostic) but the idea that a sympathetic character would promote friendship between human beings and the embodiment of evil?

But then again, in context, I understand why [Name] would think that way, even if I disagree.  Without giving any spoilers, at that point, [Name] believes [pronoun] is in a frying pan vs. fire situation and that [pronoun] is promoting the lesser of two evils – at least in the short term.  This character doesn’t truly believe the powers of Hell are good friend material, but believes there may be no other alternative to allying with them.

Wild guess at what the Vatican probably thinks of this book.

P.S.  Random musing (a tad spoilery): In the German and Lithuanian texts, the name of the mirror-maker’s housekeeper is Unke, but in the U.S. text it’s Eft.

What say you, Google Translate?  Does “Unke” mean something in German?

Um.  Ok.  I guess…that kind of fits.  Like a stretched sweater, maybe.  What does “Eft” mean in English?

* I’ve decided to stop calling every book published 10+ years ago “Nostalgic.”  First, I don’t want to overuse that word to the point of cliché, and second, why call something “nostalgic” if I’ve never actually read it before?  Even if I have read it before, I don’t necessarily come to it with particularly nostalgic feelings – just curiosity at how my perception has changed over the years.  In those cases, I’ll just call it a “Re-read” and save the “Nostalgic” title for special occasions.