Nostalgic Review: Afternoon of the Elves 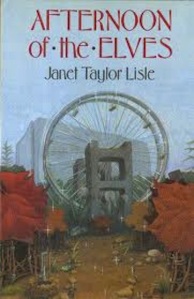 I think I first read this for a book report in fifth grade.  I remember the teacher giving us a list of titles we could choose from, and this may have been one of them; it’s a Newberry winner, after all.

Back when I wrote my first Nostalgic Review, I mentioned that Zilpha Keatley Snyder’s The Changeling had a similar story line.  I used to think Snyder’s story was a re-interpretation of Lisle’s, but in fact it’s the other way around, since The Changeling was published in 1970.  Not that Lisle was necessarily conscious of the similarities — she describes her inspiration coming from an actual little village a neighbor’s daughter made in her yard — but just reading the jacket summary “set the wild echoes flying”* for me.

Like Snyder’s Ivy Carson, Lisle’s Sara-Kate Connolly (yes, my inner Labyrinth fangirl was grinning at that name) is a pariah in the community.  There are rumors of a father in jail, and Sara-Kate herself is said to be a lying, thieving troublemaker.  And she wears such strange old clothes, as shabby as her rundown house.

Like Snyder’s Martha Abbott, Lisle’s Hillary Lenox isn’t sure what to believe about her friend sometimes.  Are things really the way Sara-Kate says they are?  With Sara-Kate, though, the uneasy questions are even more troubling, the girl’s personality harder to predict.  Is she “cruel or warm-hearted, magic or ordinary, thick-skinned or fragile, a friend or a fraud”?  Ivy seems more sympathetic and easier to get along with overall.

On the other hand, just as Ivy helps Martha be more confident and adventurous, Sara-Kate teaches Hillary to see more deeply and think more sharply, to look beyond the first explanation and really use her imagination.  “Why do you think these elves are anything like you? […] Maybe they’re so different that nothing they do is anything like what you do.”

I like that neither story tells you absolutely, definitively whether the hints of magic are real or imagined, whether Ivy and Sara-Kate are truly who they say they are, whether these books can be considered fantasies or not.  The reader has to decide for her- or himself.

The biggest difference between the two stories is the final tone.  Afternoon of the Elves feels much more bittersweet, whereas The Changeling has a more hopeful feeling in the end.  I’d forgotten that about Lisle’s story — it’s been over ten years since I last read it.  The saddest thing (no spoilers, I promise) is how people talk about Sara-Kate, how they blame her both for being too strong and for being too vulnerable.  She’s independent, so she must be conniving and cruel.  And yet how can someone so strong be such a failure in other senses?  How can she not have asked for help?  It’s as though they forget she’s only eleven.

P.S.  Apr. 25:  I also love the description of Mr. Lenox’s garden — and how its ordered beauty contrasts with the untamed beauty of the Connollys’ yard.  How the latter is a beauty recognized by few, and therefore (in my view) extra special.