Two books.  One from ’99, one contemporary.  Both explore intriguing modes of communication and teaching.

NOTE:  The following books were free copies sent to me by the publisher, Owl Kids, for review.  I received no compensation for my review, nor have I in any way been influenced by Owl Kids regarding the nature of my review.

Owl Kids is a Canadian publisher known for magazines such as Chirp (soon celebrating its 15th anniversary), chickaDEE, and OWL; as well as numerous educational texts (Why?; How Monkeys Make Chocolate; On a Medieval Day); and mystery/adventure series like the Canadian Flyer Adventures and the Max Finder Mystery Collected Casebooks.

When Owl Kids e-mailed me their Spring 2012 catalog and asked which books I might be interested in reviewing, two stood out in particular.

On my curiosity scale (a very sophisticated reaction range, from “Sorry, my brain went on screen-saver.  Did you say something?”  to  “Woah, cool, tell me more!”), the summaries of The Inuksuk Book and Off to Class fell at the “Woah, cool” end.  I’m fascinated in general by ancient languages and the meanings behind standing stones, and as I learned from The Inuksuk Book, the Arctic standing stones are themselves a language.

As for Off to Class, the summary promised tales of creative and revolutionary schools –  “schools on boats and train platforms […] schools in tents, caves, and even trees” (p. 49).  Woah, tell me more! 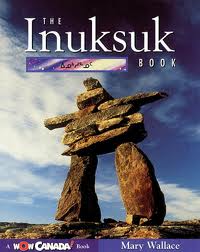 Don’t you just love those “Wow, I didn’t know that!” moments?  Did you know that Inuit is actually the plural form of Inuk, and means “human beings” in the Inuit language (Inuktitut)?  Likewise, one standing stone form = an inuksuk.             Many = inuksuit.  But two = inuksuuk.

Some are as simple as a single stone.  Others are built to look like people.  Remember the symbol for the 2010 Winter Olympics in Vancouver?  That’s an inuksuk!  An inunnguaq (the word for an inuksuk shaped like a person), to be exact.

The words for each type of inuksuk, as well as other aspects of Inuit life, are written both in Roman letters (abc…) and in Inuktitut symbols, and near the end, readers are even shown how to make their own mini inuksuk.

The images are a well-balanced mix of Wallace’s vivid illustrations, color- and black-and-white photographs, and shadow-like images faded into the background behind the text.

EDIT 12/8/11 – D’oh! I forgot to mention what an inuksuk is!  Some are signs meant to help Inuit travelers and hunters, such as by warning them of dangerous places, or indicating a place where food is stored deep beneath snow.  Others might commemorate important members of the community.  For further details and examples, you’ll have to read the book! 😉 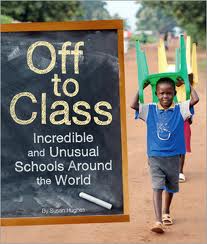 Susan Hughes.  Off to Class: Incredible and Unusual Schools Around the World.  Toronto, Ontario: Owlkids Books, 2011.

According to the United Nations, school is not a privilege, but a human right.  Every child deserves an education.  To someone like me, having grown up with school as a given – just a rite of passage you have to get through, just a bunch of assignments you have to do because your parents and teachers said so – it may be hard at first to understand what the big deal is.

But “education” isn’t just about reading long books or memorizing the steps in long division.  It’s about understanding how the world works (how does a tree help filter water?) so you can make informed decisions (what’s a simple and eco-friendly way to keep our local water sources clean?).  It’s about understanding why your leaders do what they do, so you can decide for yourself if what they’re doing is right.

So, how do you make sure all kids can go to school?  Kids who live in monsoon-flooded areas, where even schools that haven’t been damaged are difficult to get to?  Kids whose parents want or need them to get married instead of going to school?  Kids who have trouble seeing, hearing, or moving around in a traditional school?

You create a school just for them.  Like the school boats that travel from village to village in northwestern Bangladesh, picking up students for three-hour lessons – on the boat – and then returning them home.  Or the girls’ school in Kenya, whose creator works with the Maasai tradition of Esaiyata (a form of arranged marriage) to convince parents to send their girls to school.  Or Hazelwood School in Glasgow, Scotland, built especially for students with vision, hearing, developmental, and mobility challenges.

As with The Inuksuk Book, I found a number of “Wow, I never knew that!” moments in Off to School.  I had never heard of the Evenk people in Siberia, for instance – an indigenous nomadic people who raise and herd reindeer.

And did you know there’s an entire village – with shops, houses, and even satellite dishes – inside a cave?  The Miao people of Dongzhong, a village in southwest China, “are the last known people in China to live year-round in a cave.” *

At the end, Hughes includes a list of organizations, like UNICEF and El Hogar Projects, through which readers can help more children get access to school.  She also lists the websites of six of the schools discussed.

UPDATE 12/6/11 – Now, this is spooky.  First the trailers for “Hugo” begin just a few weeks after I read The Invention of Hugo Cabret, and now NPR has an article on Siberia’s reindeer-herding communities, including the Evenk!  *cue Twilight Zone theme*