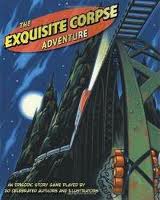 Disclaimer:  I met one of the authors, M. T. Anderson, last month at the Sheboygan Children’s Book Fest.  Whether I’ve met the author or not… whether I start a book with prior knowledge of his/her works, or from a blank slate… I always strive for honesty in my reviews, offering both positive feedback and constructive criticism.

Dancy Nancy and Sloppy Joe have just run away from the circus to find their parents, who they just recently found out are alive.  Armed with a mysterious birthday card and eleven years’ worth of conveniently useful circus skills, the twins must battle werewolves, ninjas, vampires, aliens, bad jokes, bad eggs, and a killer clown.  Among other things.

The Exquisite Corpse began as a “progressive story game” on READ.gov.*  Pieced together by sixteen authors and five illustrators (among them Lemony Snicket, Shannon Hale, Gregory Maguire, Susan Cooper, and Jon Scieszka), it’s a self-mocking adventure that says “Nyah nyah!” to all the rules of fiction writing.

It’s random.  It’s melodramatic.  It has heroes with absurdly convenient strengths, villains with absurdly convenient weaknesses, Captain Obvious exposition (“‘That’s dishonest,’ said Nancy, who was highly moral…”), and awkwardly exposition-ey dialogue (“ ‘I thought it was my stage name because my thinking is sloppy.  What with my being so much younger and more immature than Nancy.  And constantly reminded about it by Ringmaster, who never let me talk in public’ ”).

And it works!  The story is intentionally absurd, which makes it hilarious.  Ok, there was a moment within the first few chapters when I started to get bored – could I really get through a story that’s so random and so self-mocking, a story that doesn’t let you care too much about the plot or characters, because, after all, they’re just characters, and this is just a game?

Joe still had Boppo’s rubber rat in his hand.  Quick as a wink, he thrust it at the outstretched hoof, called telepathically to his twin, and bravely dived off the bridge into the gorge.  Nancy dived after him, even more bravely.  (Don’t you agree?  I mean, she’d had an extra moment to think about it.)

The only thing that still bugs me is that, of the three characters in the story who have dark skin, two are portrayed as somewhat hapless, while the other, when he’s first introduced, speaks with a very stereotypical accent that’s meant to be seen as humorous.  And in one scene, the author makes the following comment about some of the villains:  “Our heroes knew better than to trust even the pallid portion of the villainous invaders.”  True, she’s referring to egg whites, but still…