Hosni is teased by the other shepherds for being a daydreamer.  One day, his dream of travelling to a big city comes true – Hosni is asked to accompany the sheikh, his master, on a journey to sell camels in the city.  When the sheikh gives them spending money, the other shepherds buy food and treasures, but Hosni buys a few wise words.  Though the others tease him, Hosni soon realizes how precious and powerful those words are.

Based on an Arabian folktale, the story has a simple, powerful message about the value of wisdom and dreams over material goods.  Shulevitz creates bright, vibrant scenes with warm, softly glowing tones of earthy gold and sun-drenched sand. 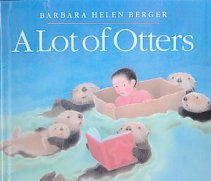 Searching for her lost son, Mother Moon weeps starry tears into the sea.  A little boy sails across the sea, sharing the moon’s story with a crowd of playful otters.  As they chase and gather the fallen stars, the otters help Mother Moon find her lost child.

This is a gorgeous, dreamy story-within-a-story with serene, enchanting illustrations.  The imagery in both the text and art is hypnotically poetic. 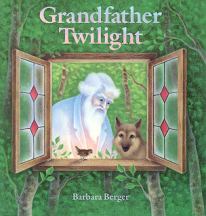 This is another dreamy, poetic story with a strongly folktale feel.  Berger opens with the image of a door inside a forest, opening into an early evening sky – a beautifully surreal depiction of the text, “Grandfather Twilight lives among the trees.”  Halfway through the story, Berger lets her illustrations speak for themselves for a while, picking up the text again as Grandfather Twilight completes his task. 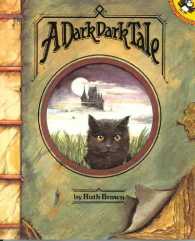 The illustrations are appropriately eerie and dim-toned – a misty moor under a dark gray sky, an ominous gray castle looming in a dark forest, where a lone owl glares from its high perch…  This could definitely be a fun read-aloud story. 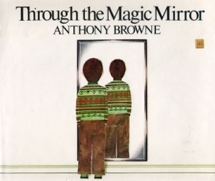 Toby wanders around his house, bored, until he comes to a strange mirror.  He reaches out to touch the strange reflection…and steps through!  On the other side is a familiar street – except that it’s not familiar at all.

I remember this book sitting on my younger brother’s bookshelf years ago.  The image on the front cover was definitely an attention-grabber, so simple and yet surreal.  As for the world behind the mirror, it’s more than surreal – it’s a series of images so random and goofy that I can only think, “Huh!” at each page-turn.  Like Barbara Berger, Browne sometimes lets his illustrations tell the story, offering only vague, matter-of-fact commentary (“At the bus stop Toby saw a queue of funny people.  They seemed a bit mixed up”).  And somehow, that contrast between the crazy sights and the matter-of-fact tone adds to the delightfully surreal feeling of the mirror-world.

Long ago, the laird (a wealthy Scottish landowner) of a seaside castle heard that great luck would be his if he wore “a pair of trousers sewn by the light of the full moon in the graveyard of old St. Andrews church.”  So he made a proclamation:  anyone brave enough to sew the trousers in the haunted graveyard would receive a sack of gold.

Del Negro’s tale of the stubborn seamstress who challenged the graveyard monster is based partly on Celtic folklore – specific inspirations include stories such as“The Sprightly Tailor” and “The Grey Claw.”

Gore’s hazy, scratch-textured paintings add to the story’s mysterious and spooky tone.  His character illustrations have a slightly Pixar style that sometimes balances and sometimes increases that spooky mood.  Del Negro also balances the scary tale with a lighthearted and witty storyteller’s voice.