And we circle back to Postcards’ beginnings!  As in October 2010, I drove up to Sheboygan, WI last weekend for the Sheboygan Children’s Book Festival.  Thankfully, the forecasted showers never came, so in addition to attending author presentations and visiting the Bookworm Gardens, I was able to wander around Historic Downtown Sheboygan and the Riverfront area.

Candace Fleming (Muncha! Muncha! Muncha!; Lowji Discovers America) believes that even the seemingly insignificant elements of one’s life can be fascinating story subjects.  Her lecture, “Weird But True: Tracking Down History’s Strangest Stories,” focused on her biographies, particularly Amelia Lost, The Great and Only Barnum, and The Lincolns.  When Fleming chooses a biographical subject, she doesn’t just want to study the most exciting (according to society) events in that person’s life.  She wants “to live with that person,” to find out all of his or her quirks, hobbies, etc.  What did he carry in his pocket?  Did she sleep on her back most of the time?

“I really believe that history is in those little moments.”

In fact, when writing an early draft of The Lincolns, Fleming was so immersed in the small details of their lives that she barely mentioned the Civil War.  And the draft was over 300 pages long.

When she has focused on the more mythic aspects of her subjects’ lives, Fleming discovered that a number of them a 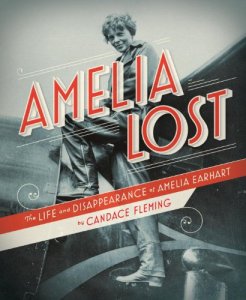 re just that – myths.  Amelia Earhart, for instance, liked to tell the story of her childhood visit to the Iowa State Fair in 1908, where she saw her first plane…except that there couldn’t have been any planes showcased at the 1908 fair.  The technology was still too early in its development.

And did you know that Fred Noonan didn’t really send her notes by fishing line during their flights, because he was actually in the cockpit with her?

At one point, Fleming joked, she wanted to call her Earhart biography Flyer, Flyer, Pants on Fire.  But she realized that in Earhart’s time, a woman really needed to be a “self-promoter” – to create a mythic persona – in order to compete with men.

In addition to stories of her biographical subjects, Fleming described her own quirky adventures (many of them associated with her history obsession).  For instance, she once had a miniature party to celebrate Benjamin Franklin’s 297th birthday, complete with a strawberry cake (Franklin loved strawberries) and the obligatory birthday song.  And then there was the impromptu trip to the Museum of American History in Washington D.C., where Fleming was so excited to see Franklin’s printing press that she reached out and touched it, enjoying for that brief moment the sensation that “me and Ben shared DNA! . . . and then the alarm went off.”

So how, as one audience member asked, does one jump from writing Muncha! Muncha! Muncha! to more heavy subjects like the Civil War?  It’s all about that funny right-brain / left-brain relationship, Fleming says.  Some days she feels like writing biographies, while other days, she’ll be in the middle of a bio and “suddenly I’m writing a story about a bulldozer.  That talks.”

If you’re ever in Sheboygan on a non-rainy day, I highly recommend a walk along the Riverfront boardwalk and lunch at one of the cozy Riverfront shacks.  I visited the Weather Center Café (809 Riverfront Dr.) three times over the weekend.  The food was ok, but the coffee drinks were amazng.  Imagine a killer-sweet combination of caramel, honey, cocoa, vanilla, assorted spices and chocolate shavings, and three shots of espresso (just one shot for me, thanks – I don’t need to be that awake).  That’s the Rob Machado Caramel Macchiato.  And they use Alterra coffee!

— Back to our regularly scheduled programming —

After lunch, I attended the Jerry Pinkney and M.T. Anderson talks.

Pinkney has illustrated over one hundred books, most recently Twinkle, Twinkle, Little Star.  Growing up in the Germantown section of Philadelphia, he would listen to “the animated way stories were told” by

adults gathered in his house at night.  “Certainly I’m a storyteller at heart.”  He was also influenced by folktales, especially Aesop’s Fables and the legend of John Henry.

It was the edition of Aesop’s Fables with Arthur Rackham’s illustrations that showed Pinkney how beautifully text and art could work together (it’s only fitting that Pinkney illustrated his own edition of the Fables).  Pinkney’s own art can be “read” like a story, says Carol Hardwick, a friend of the festival’s co-chair and the introductory speaker before Pinkney’s presentation.

Growing up, Pinkney was the only artist in his neighborhood.  He used to draw on the back of wallpaper his father brought home, or would draw people at a busy intersection while waiting for his turn to bike across.  Those drawings caught cartoonist John Liney’s attention, an 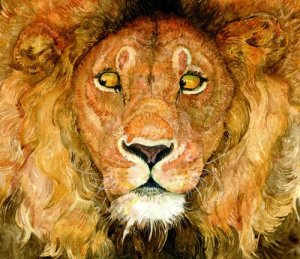 d the latter invited Pinkney to see his studio.  It was Liney who showed Pinkney that art can be a viable career path.

As an illustrator, Pinkney wants the entire book to be a work of art – its weight, its smell, its narrative rhythm, “what happens when you turn that page…”  It should be an interactive experience.  His adaptation of The Lion and the Mouse, for instance, is almost exclusively visual, so readers can imagine for themselves what is happening in each scene.

Even the front cover is text-less – only the lion’s face and mane fill the space, while, as Wendy Lukehart of the Washington D.C. Public Library notes in her School Library Journal review, “the direction of the beast’s gaze and the conflicted expression on his tightly cropped face compel readers to turn the book over, where a mouse, almost filling the vertical space, glances back.”  As Pinkney himself explains in his Artist’s Note, he wanted “to place these two spirited creatures head-to-head on [the] book’s jacket, each commanding powerful space and presence.”

The final talk I

attended on Saturday was M. T. Anderson’s “Mythology of the American Landscape.”  Anderson writes fantasy and satire, including his Pals in Peril series, which spoofs adventure genres like The Hardy Boys-style mysteries.  He is currently writing the final book in his Norumbegan Quartet.

Growing up, he read stories of foreign adventurers like Conan the Barbarian, on whom Anderson says he models his own life.  At one time, he wanted to be a travel writer.  Cue anecdotes of awkward language-learning experiences…

He and a girlfriend once planned a trip to France, and while she studied typical phrases (“Which way to the bus stop?”), Anderson focused on the much less practical language of Baroque French opera.  In the end, due to problems with the travel agency, the pair never did get to France.  They went to Canada instead.  There, while hiking on the Gaspé Peninsula, Anderson tried to tell a fellow hiker that there were some deer farther along the path.  Instead, he told the man there were giant brains ahead.

Another time, while traveling through Nepal, Anderson got strange looks when he tried to order food, because the words for “chicken” and “dog” were so similar.

In the end, he decided to focus his writing on the American landscape—like exotic Delaware.  He “went online for five or ten minutes, looked at Mapquest…” and decided that towns called “Slaughter Beach” and “Broadkill” must be home to Vikings.  But, apparently, the claims of tree squids and lizard-men in Anderson’s online Tourists’ Guide to Deepest, Darkest Delaware were wrong, as he was advised in a mock-stern letter from the governor.  That was the “first time I had a state governor call me ‘buster,’” Anderson said.  (Just so we’re clear, the governor wasn’t actually miffed – he was playing along with the joke 😉 )

In addition to the landscape, Anderson enjoys studying local legends and collecting “books of ghost lore” (though he himself doesn’t believe in ghosts).  And not just the usual paranormal stories.  He once spoke with a boy who claimed his house was haunted by a floating orange square.  “That’s a cool thing to be haunted by, to be haunted by geometry!”

Anderson’s own house is said to be haunted (“I found that fact merely irritating”) – a neighbor once asked if there’d been a party the night before, because he’d heard laughing for several hours.  There was no party.