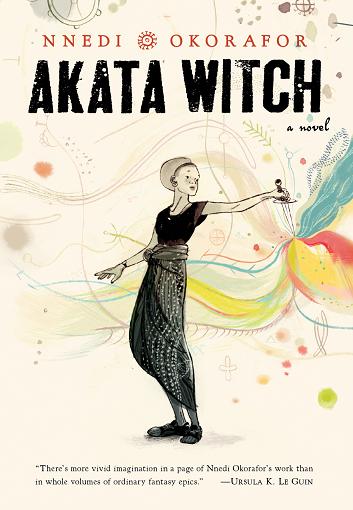 Formerly on my “reading wishlist,” inspired by the Charlotte’s Library review.

NOTE:  Akata Witch contains strong language and some graphic violence, as well as other scenes that may be too frightening for younger readers.

It started when she looked into a candle flame and saw the apocalypse.  Sunny already felt like a freak – she had West African features, but skin and hair like “washed-out paper” – but this was something else altogether.  She might’ve tried to forget about it if she hadn’t met Chichi, who insisted that Sunny belonged to an ancient society of sorcerers, the Leopard People.   While kids like Chichi knew about their Leopard heritage from childhood, Sunny was a “free agent,” someone whose parents were non-magical Lambs.

Now, after only several months’ training, Sunny – along with Chichi and two other first-level Leopards – is expected to stop a serial killer who has been targeting children in nearby communities.

What worked:  Like Charlotte, of Charlotte’s Library, I loved the story’s focus on a different kind of magic – different from the kind I’d grown up reading about – based on West African traditions and folklore.  Sunny and her friends learn the ancient art of juju, harnessed not in wands but in special knives that can draw images in the air.  They see wrestlers fight with both physical and magical strength.  And they witness one of the most frightening and dangerous spells – a masquerade.

On the other hand, those who have read Harry Potter will find many parallels in Akata Witch:  the magical tool that chooses its user, the unique currency, the prejudice against non-magical people…

I liked the dynamic among the four main characters – they balance one another well, as Chichi and Sasha themselves point out.  Sunny and Orlu are generally cautious and rule-abiding, while Chichi and Sasha are more adventurous, even sometimes reckless.  They often fight, but ultimately support each other.

And Sunny is very believable as a twelve-year-old who’s struggling to keep up in a completely unfamiliar situation, constantly being reminded that she’s a beginner.

What didn’t:  The point-of-view switch from the Prologue’s first-person to the rest of the story’s third-person was a bit jarring.  I liked hearing Sunny’s voice at the beginning, and the jump to third-person in Chapter 1 felt like a letdown, distancing me from Sunny and, somewhat, from the story.

There are places where the story seems to contradict itself.  For example, early in the story, one of the characters explains that he has the power to reverse harmful magic, and that this talent is instinctive – it can happen without him thinking about it.  But there are moments when he’s attacked by spells or spirits and seems powerless or has to concentrate to stop them.

Then, there is the elders’ expectation that Sunny and the other three first-level students deal with a nearly-unstoppable serial killer all by themselves.  Just go on, kids, we’ll wait for you at home.  You may or may not survive, but oh well.  And the elders’ explanation for their choice doesn’t feel strong enough to make it seem plausible.

As for that final confrontation, I agree with Charlotte that it passes by far too quickly, and is solved with anticlimactic ease.  The same goes for some of the story’s smaller conflicts.

Overall:  Akata Witch is a fascinating story with memorable, well-balanced characters.  I would have liked to see certain concepts and plot points explained more fully, and the conflicts could have been much more realistically difficult to overcome.  Still, I’ll be interested to see if there’s a sequel (the ending leaves that possibility open).