I found this article on excellent character descriptions through dmacabre‘s blog.  The list focuses mainly on adult novels, but  does include a few Juv/YA gems:  Harry Potter, The Hunger Games, and The Golden Compass.   To the list, I would add:

One of Kathi Appelt’s first descriptions of the villain in The Underneath: “This boy, whose broken face now resembled the prehistoric fish that still swam in the muddy waters of the bayous, half fish, half alligator.  A gar.  The most vicious of the scale-and-fin crew.  Beware his razor sharp teeth, his steel-trap jaws, his eyes that glow in the murky water. Here then is a hard-edged bitter boy become a man known as Gar Face.  […]  Over this past quarter century, the years have softened the old pine.  Not so Gar Face.  Do not cross his angry path.  Do not.” (p. 14). Appelt’s description first causes the reader to sympathize with the boy because of the way he was injured.  But it also foreshadows the boy’s destructive choices.  The narrator lets us know that Gar Face is dangerous because his attitude is like that deadly sharp-toothed creature.  Unlike the serene pine, Gar Face becomes more angry and destructive as a result of his injuries. 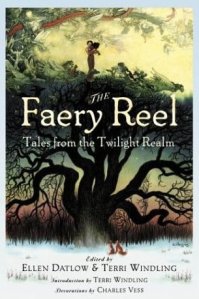 Gregory Maguire’s description of the tree sprite in “The Oakthing,” from Ellen Datlow and Terri Windling’s anthology, The Faery Reel: Tales from the Twilight Realm: “It was, she decided, a tree sprite of some sort.  In sorry shape.  Sorely in need of succor, or attention, or perhaps concealment; she couldn’t tell.  It seemed an angular knot of twigs from one angle; and then again there were tines of thorn and froths of densely clumped root.  Like pubic hair or the hair in armpits, rangy, airy, and with a vegetable odor strong enough that even Mémé Gauthier could appreciate it.  It was matted with mud that little by little was drying and falling in small clods on the floor” (p. 346). It’s such an earthy, visceral, even somewhat vulgar description of a faery – not a sparkling, winged humanoid, but an undefinable knot of twig and earth.  It’s a refreshing change, and what I imagine Datlow and Windling were going for when they commissioned the stories for The Faery Reel: “‘No butterfly-winged sprites,’ we pleaded” (Preface).  And Maguire’s description of matted thorn and falling clumps of mud fits perfectly with the story’s overall tone of ruin and decay, the effects of war.

Narrator Molly Bryson’s description of her three-year-old brother in Sylvia Peck’s Seal Child: “‘Meara,’ I said patiently, ‘this is Douglas. This is my little brother.’  But she wasn’t paying attention.  Neither of them were.  Douglas is shy with strangers, so I couldn’t figure out what was going on.  But he was laughing at the sounds she was making and looking at her the way he looked at the candles on his birthday cake when he loved them too much to blow them out” (p. 131, Morrow Junior Books hardcover edition). It’s such a sweet image of childhood, when you can be so enchanted by something as simple as birthday candles – so enchanted you don’t want to blow them out.  There’s also something sad in the description, a sense of something that’s beautiful but impermanent.

Narrator Leo Borlock’s first descriptions of the title character in Jerry Spinelli’s Stargirl (this isn’t a SF/Fantasy book, but I think Spinelli’s character descriptions deserve special mention): “When she came by our table, I got my first good look at her face.  She wasn’t gorgeous, wasn’t ugly.  A sprinkle of freckles crossed the bridge of her nose.  Mostly, she looked like a hundred other girls in school, except for two things.  She wore no makeup, and her eyes were the biggest I had ever seen, like a deer’s eyes caught in headlights” (p. 5, Alfred A. Knopf paperback edition). Add this to Leo’s description from the previous page of her shoulder-length sand-colored hair and the floor-length dress that “could have been her great-grandmother’s wedding gown,” and we now know the following about Stargirl: 1) She doesn’t keep up with contemporary fashion. 2) She’s completely artless and natural – she wears no make-up and keeps her hair simply down. 3) Ironically, she seems as blown-away by the other students as they are by her, as evidenced by her eyes – “like a deer’s eyes caught in headlights.” 4)  And yet, she’s not completely un-relatable, as evidenced by Leo’s comment that, at least in some way, “she looked like a hundred other girls in school.” We also learn something about Leo and the other students: 1) Leo defines a “gorgeous” girl as one who doesn’t have freckles.  It’s a minor point, but it adds to the story’s theme of standing out vs. blending in.  In Leo’s view, it seems, a beautiful face is totally smooth, with no spots to catch the eye.  If this view is shared by most guys in Leo’s school, perhaps that’s one reason why… 2) Most girls in his school do wear make-up. Overall, Leo’s early descriptions of Stargirl make us want to know more about her, and make us anticipate some conflict between her and the rest of the school (Will the other students accept her?  How will she react to their reactions?) Finally, I love Leo’s description in Stargirl of a more conventional Mica Area High School student – and, in turn, of the overall personality of the school. “In terms of achievement, Wayne Parr seemed to be nobody.  He played on no sports team, joined no organization, won no awards, earned no A’s.  He was elected to nothing, honored for nothing–and yet, though I did not realize this until years later, he was grand marshal of our daily parade” (p. 19). Wayne Parr, in other words, wastes no energy trying to stand out.  And yet, because of that, he does stand out – because the MAHS students value the unexceptional.  Leo confirms this on the next page: “Did Parr create us, or was he simply a reflection of us?  I didn’t know.  I knew only that if you peeled off one by one all the layers of the student body, you would have found at the core not the spirit of the school, but Wayne Parr” (p. 20). There’s something a bit spooky about that image.  It’s one of the most original descriptions I’ve seen of a mediocrity-obsessed culture. What are your favorite character descriptions?