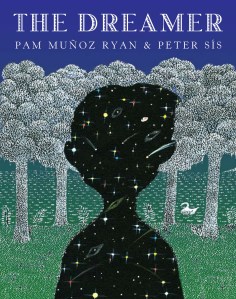 Neftalí Reyes is a daydreamer.  When he should be studying math, he imagines the rain washing him out to sea to become a ship captain.  When he should be hurrying to school, he stops to study tree roots and stare at a wind-caught umbrella.  His father calls him “scatterbrain” and “idiot,” and other kids laugh at him.  Still, he hears a voice calling his name.

Neftalí? To which mystical land does an unfinished staircase lead?

In the largest of worlds, what adventures await the smallest of ships?

No matter how much his father bullies and discourages him, Neftalí cannot stop his wandering, questioning mind.  And as he grows older, he begins to challenge not only his father’s beliefs, but those of his government.

The Dreamer is part fiction, part biography.  You may already know who Neftalí Reyes grew up to be.  If you don’t, I won’t give away the surprise.  It’s really not a spoiler, but I personally enjoyed the Aha! moment, since my edition didn’t say anything in the jacket description about Neftalí’s future name.  Just know that many online reviews, including on Amazon, do reveal it.

Muñoz and Sís tell the story through a blend of prose, poetry, and illustration.  There are pages filled with the sounds of rain, or of waves crashing on a beach.  There are drawings as surreal as Neftalí’s daydreams – sometimes the drawings themselves help tell the story.

The one thing that bothered me when I first read the book was how the plot would seem to move toward a suspenseful moment, but then the story would skip to several years later and the conflict would be glossed over or forgotten.  There were times when I was left thinking, But what happened next? How did so-and-so react?

But maybe these breaks or anticlimaxes were unavoidable, precisely because The Dreamer is based on real life, and real life doesn’t behave like fiction – sometimes rebellion is quiet, and sometimes we can’t know exactly what happened in a situation.  We have to imagine it for ourselves.

Overall, The Dreamer is a tribute to curiosity, and shows that the “absent-minded” can have the most powerful and profound ideas.