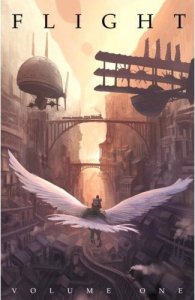 This is a series of comic anthologies in which, as the title suggests, each  story relates in some way to the concept of flight.

Sometimes, the connection is obvious:  “Formidable,” by Bengal (Vol. 1), takes place inside a great zeppelin.  “The Courier: Shortcut,” by Kazu Kibuishi (Vol. 7), is about a mail carrier who travels on a giant white bird.

In other stories, the relation to flight is less obvious—maybe metaphorical—or makes a brief appearance.  “Outside My Window,” by Khang Le (Vol. 1), is about a girl who, like the bottled butterfly on her windowsill, is suddenly trapped in an alternate world by a lonely robot.  “Igloo Head and Tree Head,” by Scott Campbell (Vol. 4), is about…exactly what it sounds like.

Bone creator Jeff Smith summarizes the series as an “anthology of imagination,” with stories that “explore the human condition through the looking glass of fables, wonder, pathos, and humor” (Vol. 4: Afterword).   The stories can be simple and straightforward, like Kean Soo’s “Jellaby: First Snow” in Flight Explorer Vol. 1, or confusingly abstract, like Jacob Magraw-Mickelson’s “Dummy Brother” in Flight Vol. 1.  They can be:

Hilarious:  Scott Campbell’s “Igloo Head and Tree Head” stories (Vol. 4 and 5) – the concept is so incredibly random:  a world of blob-like figures named for the objects on their heads.  Cannonballhead, Castlehead, Canoehead…

Sad:  “Polaris,” by Azad Injejikian (Vol. 3) – a little girl is harassed by her classmates and neighbors because she can’t walk without floating six inches off the ground.

Sweet:  “On the Importance of Space Travel,” by Svetlana Chmakova (Vol. 5) – Jeannie insists she is the Princess of Pluto.  She doesn’t have photos (they were ruined in an asteroid collision), but she drew pictures.

Creepy:  “The Bowl,” by Clio Chiang (Vol. 1) – a man feeds a hungry blackbird, and is given a bowl that will fulfill three wishes.  But some good things have a dark side…  (Warning – includes a fairly graphic scene of a naked woman giving birth)

and Thought-provoking:  “Message in a Bottle,” by Rodolphe Guenoden (Vol. 3) – one of those “appearances can be deceiving” stories, but not in a cliché way.  It left me smiling and thinking, “Huh!”

The art styles range from stick figure-ish, to big-eyed cartoony, to collage-style, to sophisticated watercolors.  I even thought of Calvin and Hobbes while reading Jake Parker’s “Missile Mouse: The Guardian Prophecy” in Flight Explorer Vol. 1 (think Spaceman Spiff).

It’s even fun to read the author and artist blurbs at the end of each volume, and see their yearbook-style photos.  Jen Wang, who wrote “Paper and String” for Vol. 1, “lives in San Francisco where owning ferrets is illegal, but Korean music video countdown is on every weekend, so that’s okay.”  Vol. 7’s Kostas Kiriakakis “is occasionally drawing pictures the way others tell him to, in exchange for food.  Once sated, he falls back into his lifelong habit of drawing as he wishes, until he starves again…”

And then there’s the essay by Scott McCloud at the end of Vol. 1, dated 2054 and praising the “fiftieth anniversary commemorative reprint” of Flight. 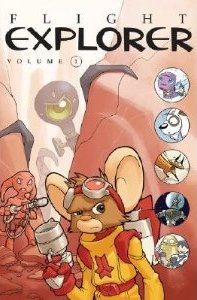 Flight Volume 8 will be released on June 28, according to Amazon.  In the meantime, fans can find information about other works by the Flight contributors at www.flightcomics.com.  For instance, you can now find Michel Gagné’s “Saga of Rex” stories in a single volume published by Image Comics.